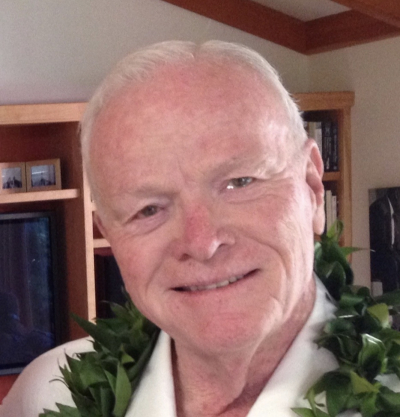 Dick was born in Santa Monica, California on March 18, 1930 to Lawrence Samuel Horn and Jean Anderson Horn. His Santa Monica childhood centered around sports, encouraged by his father Larry, who coached football and track and field at Santa Monica City College and still holds the Midland College (now Midland University) football record (in 1920) for single game and career scoring. Dick attended Santa Monica High School (“Samohi”), where as quarterback he led his football team to the Southern California C.I.F. championship in 1947. He was the Samohi Student Body President his senior year.

Dick entered Stanford University in 1948. He met Jeanie his sophomore year at Stanford when she was a freshman and they were both working in the Roble Hall dining hall. The previous year, the Stanford football team had attended a reception at the home of Jeanie’s parents (John and Helen Fox) at Punahou School in Honolulu, where John was President. Dick noticed a photo of Jeanie sitting on their piano and discreetly inquired who that beautiful girl was. Little did he know that that beautiful girl would soon be his wife, to whom he was married for 60 years.

Dick was a defensive back on the Stanford football team, which played in the Rose Bowl in 1952. In 1991, he was named to the Stanford All-Century team and in 2009 he was inducted into the Stanford Athletics Hall of Fame. His high school and college football experiences, and the camaraderie he shared with his teammates, were some of his fondest memories. He cherished and nurtured friendships with many of his teammates for decades.

After graduating in 1952, Dick entered the Air Force, where he was stationed in Merced, California. He and Jeanie married in the Stanford Church in May 1954 and settled in Menlo Park. He played football for the Baltimore Colts in 1954 and 1958, and attended Stanford Medical School from 1955 to 1959. He joined the Menlo Medical Clinic in 1963 and spent his career there as a pediatrician. His patients remember him for his “Donald Duck voice” and many of them continued to see him after they’d graduated from college! Dick’s partners remember chuckling over the image of grown kids sitting on tiny children’s chairs in the pediatric waiting room.

Dick and Jeanie raised four children in Menlo Park and Palo Alto. He loved the mountains and was an avid skier and tennis player. In 1971, they built an adobe brick home which, over the years, became a gathering place and hostel for friends, extended family, and numerous Stanford students and graduates. Many of their friends remember the “aloha spirit” with which Dick and Jeanie welcomed these folks. A close friend recently remarked “That home meant so much to so many people.” Dick and Jeanie also enjoyed many years of tailgating parties at Stanford football games and social tennis on the court at their home.

Dick is survived by his children John, Lisa, Bruce and Kristin (Alexander), and his grandchildren Mia, John Cameron, Chloe Alexander, and Luke Horn.

Donations may be made to the Stanford Buck/Cardinal Club and the Samohi Viking Fund ([email protected]).

Photo Gallery
0 photos Upload a photo
Remembrances
0 entries Submit a remembrance
Memorial service
His memorial service will be held on Friday, December 16, 2022 at 11:00a.m. at the Menlo Church, 950 Santa Cruz Avenue, Menlo Park, CA 94025.
Make a donation
Donations may be made to the Stanford Buck/Cardinal Club and the Samohi Viking Fund ([email protected])
About this site     Contact us