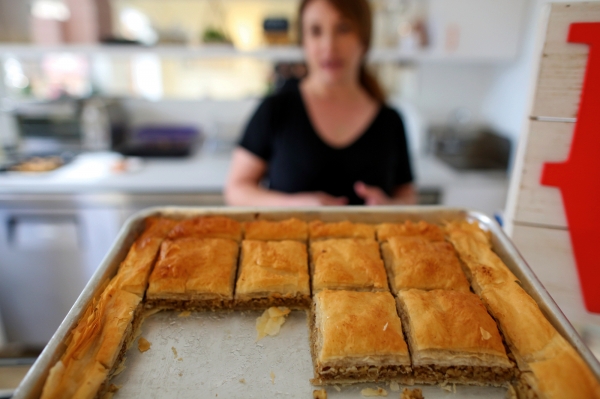 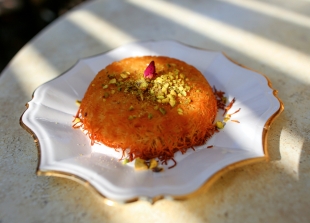 More than the taste of knafeh, Maya Fezzani remembers the movement of her grandmother's hands making the traditional Middle Eastern dessert.

"It definitely was not hands-on because she didn't allow anyone in the kitchen, but it was all about seeing, tasting and smelling when she was baking," Fezzani recalled. "I was all eyes on her."

Decades later and thousands of miles away, Fezzani channels her grandmother in a commercial kitchen in Menlo Park, where she preps and bakes all of the desserts for her Middle Eastern sweets company, Levant Dessert. Her hands fold unsalted butter into a tangle of frozen kataifi in a pan. She lines muffin tins with the mixture and layers each with cream or cheese and butter, then bakes them until they're golden and fill the kitchen with a toasty, sweet aroma.

Levant Dessert is Fezzani's first-ever food venture. She was born in Lebanon and lived in Syria as a young girl before her family left for England. She eventually met her husband there, whose work moved them to Hong Kong, Chicago, back to England and then Silicon Valley in 2008. She worked for her husband's solar startup and also in logistics at Nordstrom, but neither were fulfilling for her.

Fezzani, bubbly and earnest, said she would always bring her Middle Eastern desserts to dinner parties — homemade knafeh, baklava, pudding tinged with orange blossom, barazek — and friends often urged her to take her hobby to the next level. She started seriously considering it a few years ago, and was particularly inspired by the opening of Mademoiselle Colette in Menlo Park. Seeing the French bakery come to fruition helped her envision what it would be like to start her own venture.

Fezzani started with special orders and events, then pop-ups at Nordstrom and Facebook. In 2019, she opened a storefront inside Sultana restaurant in Menlo Park after meeting the owner at a bridal shower she catered. Sultana diners can order from her menu, but customers can also come in to purchase her desserts directly.

Knafeh is Fezzani's calling card. She makes several versions, including one filled with cream and another with mozzarella and mascarpone cheeses. Knafeh is traditionally filled with akawi, a salty Middle Eastern cheese, but Fezzani said she hasn't found a good-enough version in the Bay Area. After the knafeh are baked, she drizzles each one with homemade orange blossom syrup.

Her custom knafeh cakes — shaped into numbers and letters for birthday parties, pacifiers for baby showers and even female body parts for a bachelorette party (she declined a request for a male body part) — have become popular. At a recent birthday party, one satisfied customer declared, "knafeh is the new cake."

Fezzani also makes a series of seasonal milk and rice puddings with toppings such as nuts, orange blossom syrup, apricot paste or raspberry coulis. For winter, she has a caraway cinnamon pudding that's traditionally served when a woman gives birth, she said, either as a hot, creamy drink or put in the fridge to set for a chilled pudding. Fezzani also makes balooza, a Syrian rice pudding topped with orange curd. She thickens the puddings with salep, a flour made from orchid roots that's common in the Middle East, along with a gluten-free version using cornstarch instead.

Because of frequent dietary restrictions and requests from customers, Fezzani has added gluten-free and vegan desserts to her lineup, including using vegan butter to make pistachio baklava and coconut oil in sfoof, a Lebanese turmeric cake (which she serves with English custard, a vestige of her years in England). She's also cognizant about how much sugar goes into her desserts, so they're all subtly, rather than sickly, sweet. She makes her own sugar-free stevia syrup and wants to experiment with monk fruit as a sweetener — not only for health reasons but also for flavor, she said.

"I believe in tasting all the flavors in a dessert," Fezzani said.

Soon, she plans to add savory items and a line of Middle Eastern-inspired chocolate desserts, such as ganache with dates and pistachio.

Fezzani isn't sure whether she wants to graduate to her own brick-and-mortar bakery. Like her grandmother, she likes being hands-on and in full control of the business she built from scratch. The hours she spends tweaking recipes and baking into the evening are a gift, she said, a way of doing something for herself after years of raising her children and working unsatisfying jobs.

"It's a story I'm writing myself," she said of the bakery. "I don't want anyone else to write it for me."

The first few seconds after awakening; before I remember the virus
By Chandrama Anderson | 0 comments | 2,528 views

Can you stay healthy without making more trash?
By Sherry Listgarten | 2 comments | 1,820 views