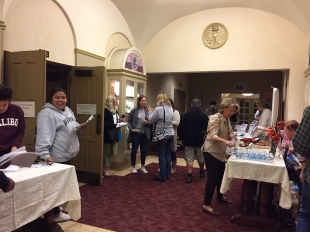 Students and parents at Sequoia High School screened the film "Angst" about anxiety on Oct. 16. (Photo by Angela Swartz)

Anxiety, compounded by academic pressure, led one Sequoia High School student to self-harming actions, landing her in the hospital twice.

This student and other Sequoia students dealing with anxiety spoke on a panel discussion after a screening of the film "Angst" at the high school on Oct. 16. Students shared how the 2017 film is raising awareness about anxiety and how they are finding some solace in more awareness and mental health resources.

"(The film) gives extreme details of what it (anxiety) really is and helps share stories. It makes me feel like I'm not the only one," a Sequoia High senior who suffers from panic attacks said.

Because of students' mental health struggles, the Sequoia Union High School District has focused on educating more people about mental health. Their efforts include partnering with local organizations to screen the 56-minute film at four district high schools this school year. "Angst" includes interviews with young people who suffer, or have suffered, from anxiety who talk about they've learned about it. In the film, mental health experts talk about the causes of anxiety. The film also mentions resources and tools for coping with anxiety.

The film has touched a lot of students, said Charlene Margot, founder and director of the Parent Education Series, a Sequoia district program in which adolescent academic, physical, mental and social-emotional health and well-being experts teach district parents, staff and community members about their fields.

Students at the panel shared how they've learned coping mechanisms like exercise, painting or even watching TV with a family member. It can still be hard to control anxiety, one student panelist said. Parents should know there's a fine line between being helpful and too helpful, but they should treat anxiety like a medical condition, the student said.

"Make them (people with anxiety) feel loved and appreciated," said the student, who added it's easy to feel like teens with anxiety are disappointing their parents. "It doesn't have to be a car or a phone. Sometimes I don't have control over most of my thoughts. It's nobody's fault."

About 200 parents, students, teachers and community members came out to the Oct. 16 Sequoia High showing.

The Sequoia High screening was the final of four scheduled showings in the district, but officials would like to also show the film at Redwood High School and East Palo Alto High School, Margot said. Hillview Middle School in Menlo Park will screen the film Wednesday, Nov. 7, at 6:30 p.m.

The district first showed the film at Carlmont High School in November 2017 and about 450 people watched it, Margot said. The film has struck a chord in the community, even inspiring district students to make their own films about anxiety, she said.

Or show your support for local journalism by subscribing.

The first few seconds after awakening; before I remember the virus
By Chandrama Anderson | 0 comments | 2,525 views

Can you stay healthy without making more trash?
By Sherry Listgarten | 2 comments | 1,798 views

Think about helping others in our coronavirus-affected area
By Diana Diamond | 3 comments | 1,705 views