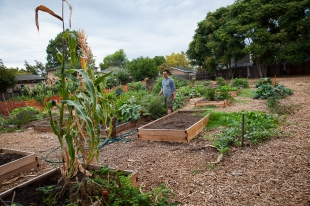 Belle Haven resident Ramon Sanchez, 19, can walk through a gate into his backyard into the Belle Haven Community Garden which Facebook has been helping the Rotary Club of Menlo Park to support. (Photo by Michelle Le/The Almanac)

It would be interesting and useful to hear balanced criticism based on this large corporation's presence, not just the good stuff.

I'm glad that Facebook, rather than the city, is paying for various projects. It's the least that they can do when they dodge taxes, as is standard with so many other companies.

We've been force fed so much good news about these companies it's easy to be blinded to their negative impacts. Note the glossing over of skyrocketing rents, which actually has a number of residents in BH terrified. Will the upcoming residents' displacement be glossed over, too?

This all sounds rosy and cozy, but I too, am concerned about the displacement and huge rent increases for anyone in the low income category as this part of Menlo Park develops further. What part is facebook doing to preserve the affordable aspect of Belle Haven? When they speak of building huge complexes for their team, could they also built for low income as a tax write off and as a trade off for any displacement? Then I would be impressed.

From the owner of LV Mar and La Viga, a Palo Alto restaurant inspired by Mexico City
By Elena Kadvany | 4 comments | 3,748 views

Can you Pay to Reduce your Carbon Footprint?
By Sherry Listgarten | 10 comments | 2,579 views

You Can Help: Scents and Migraines
By Chandrama Anderson | 1 comment | 2,178 views