Original post made by ValerieG, Atherton: Lloyden Park, on Apr 18, 2018 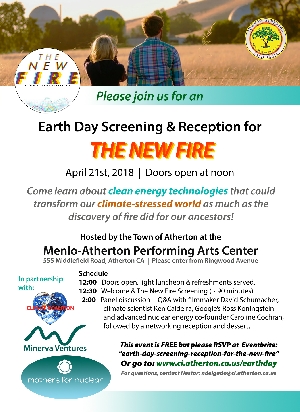 ValerieG is a registered user.


Correction: Text was inadvertently deleted following use of a "less than" symbol for "RE(less than)C." The expert panel for this event has, in addition to award-winning filmmaker Dave Schumacher; Ross Koningstein, a Google energy expert who has studied the issue of eliminating emissions for Google, renowned Stanford climate scientist, Dr. Ken Caldeira, and one or more of the founders of Oklo, a Silicon Valley-based advanced nuclear start-up.

How Much Time do You Spend Outdoors?
By Chandrama Anderson | 0 comments | 2,225 views