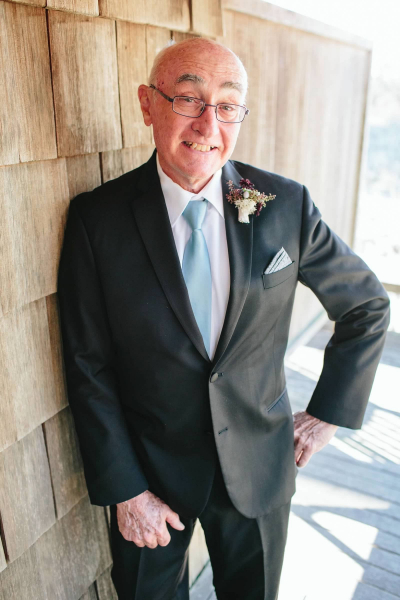 William Morris Robinson, known as “Rob” to most of us, “Robby” to his childhood friends, and “Danger” to those at Philz, drew his last breath on May 25, 2022. Only a month earlier, Rob had ridden his beloved orange bicycle from home to the Palo Alto Baylands for a tour of his favorite bicycle and pedestrian infrastructure.

Born November 15, 1939 on Route 66 in Amarillo, Texas, Rob was the first child of William F. Robinson and Anna J. John. He often reminisced about growing up in Amarillo: playing outdoors, listening to radio, learning crafts, and palling around with his younger sisters, Virginia (Gigi) and Mary. The family moved to Dallas when Rob was a teenager. Although few of Rob’s stories were about Dallas, he did tell stories about the car he made from scratch in the garage of his parents’ house. He also fondly remembered hiking the Grand Canyon from the North Rim with the Boy Scouts and Scout Leader, Doc Heroy. Doc opened Rob’s eyes to the wonders of the world. Rob graduated salutatorian from Hillcrest High in 1958, then went to college at Oklahoma State University, joined Kappa Sigma, and spent several more years than the average person earning his bachelor’s degree. Finishing in Mechanical Engineering at the University of Texas Arlington as a member of Tau Beta Phi in 1969, thanks to the encouragement and support of his wife Ann, he put the epic undergraduate career behind him.

Rob met Ann in the fall of 1964 through friends in the Dallas area. They spent the first several months of courtship creating the set for an off-Broadway production of Arthur Miller’s “After the Fall” at the Northaven United Methodist Church. Within a year and on a student budget, Rob and Ann married at the church August 28, 1965. After celebrating with family and friends at Rob’s parents’ home, they honeymooned in their Nimrod camper in New Mexico. Settling in Farmers Branch, Rob and Ann spent the first several years of marriage working and attending school in Dallas. In 1969, Rob was accepted to the Master of Science Mechanical Engineering and Product Design at Stanford University. He and Ann moved to Palo Alto, CA with their black Labrador, Daffy. They fell in love with Northern California and become longtime Palo Alto residents.

Rob spent the lion’s share of his 45-year career as an Industrial Designer in the Bay Area working for Raychem. He worked on civilian projects, from cruise control switches to surge arrestors, and contributed to patents. But he also loved to joke around. Teaming up with a few colleagues, he once pranked his manager by concealing the manager’s office door behind a freshly built wall. He later moved to other companies (including Hewlett-Packard, Anritsu, Davis Instruments, and CellNet) where he designed more components and processes, and garnered a few Halloween costume prizes. He often discussed what he was working on – from cell phone components to packing material – and thought about any problem of any kind that could be solved with engineering. At one point an IT department named Rob’s work computer “Danger” after The Robot’s exclamation “Danger, Will Robinson!” in the 1960’s TV show Lost in Space. Rob then adopted the nickname for himself!

The bicycle was Rob’s preferred mode of transportation. He insisted that he work within biking distance of home or a transportation hub. His family came to know his love of cycling and admired his dedication to alternative modes of transportation long before that was a thing. He joined a Bay Area 50+ cycling group, rented bicycles while on business trips, and cycled major parts of Ireland with his good friend Bill. Between commutes to work and weekend excursions, Rob viewed and celebrated the wonders of everyday life at about 10 miles per hour.

One never knew what whimsical thing Rob would create or wear. He adorned his bicycle with homemade creations: a wooden diapered baby, a yellow hand, bags, and flags. He built a larger-than life human head to store the family’s first computer (once published in Sunset Magazine); designed and fabricated weathervanes in the shape of flying geese for nearly every member of the extended family; created wooden puppets such as “Bor” (which is “Rob” spelled backwards); and made much, much more for everyday problems and fun. His children remember the backyard tree house he made for them, a clown beanbag toss with spinning teeth and retractable eyes, and a solar hot dog cooker. He also wore and adorned lots of crazy hats and used the name “Danger” to place orders in coffee shops or reservations in restaurants. Later in life, those hats protected his balding head from the sun, or so he claimed. The use of “Danger” caused confusion for those in earshot, but it was darned funny in restaurants: “Danger! Party of four!”

There was never a dull or quiet moment around Rob. When he made waffles, he woke his children with the smoke alarm. Rob dressed as a clown for birthdays and churned ice cream for everyone on the Fourth of July, too. He took his children car camping and treated them to never-ending batches of yeast pancakes. Other trips were bike rides along new river routes, narrow gauge train rides, and passage on new public transit routes. Rob also introduced his nieces and nephews to computers, old cars, and bike rides around the Bay Area. Later in life, Rob dedicated time and love to his grandchildren: watching them, reading to them, explaining things, or just making them laugh with silly hats and expressions. During family holidays he lent Ann a hand at set up and clean up and entertained guests with his boisterous voice and all-around energy. When he wasn’t with family or at work, he was often at the YMCA’s deep water fitness class. He was always moving, stilling only for his 21-minute afternoon nap.

Rob was dedicated to volunteering. Before children, he poured energy into Creative Initiative Foundation with Ann. Later, he volunteered at Unity Palo Alto and gave innumerable hours to Cystic Fibrosis Research, Inc. as a member of the Board of Directors and the Research Advisory Committee. He also championed bicycle commuting. He donated time and energy to the Silicon Valley Bicycle Coalition, made pancake parties for cyclists on Bike to Work day at the Wilkie Bridge, and served on the City of Palo Alto Pedestrian & Bicycle Advisory Committee (PABAC). As a crossing guard for the Palo Alto School District in the final years of his retirement, he pushed for bike and pedestrian safety, especially for youth, and worked to coordinate the efforts of PABAC with the City School Traffic Safety Committee. Rob gave his heart, intellect, and energy to so many things and people. Like a dad to everyone, he empressed family, friends, friends of friends and near strangers with his engineering know-how and generosity.

Rob is survived by his wife Ann Robinson; his sister Mary Polk and her husband Bill; daughter Clare and her husband Eduardo; son Carl and his wife Kara; and his grandchildren Cristóbal, Everly and Josephine. Loved as a husband, dad, grandpa, uncle, friend, neighbor, colleague, volunteer, and extraordinary human being, the big Rob-shaped whole in the world will be felt by so many.

Photo Gallery
0 photos Upload a photo
Remembrances
0 entries Submit a remembrance
Memorial service
A celebration of Rob’s life will be held at the Mitchell Park Community Center September 3 at 10 am.
Make a donation
Please make donations to the Silicon Valley Bicycle Coalition (https://bikesiliconvalley.org/), the Pulmonary Fibrosis Foundation (https://www.pulmonaryfibrosis.org/), or the Cystic Fibrosis Research Institute (https://www.cfri.org/) in his honor.
About this site     Contact us