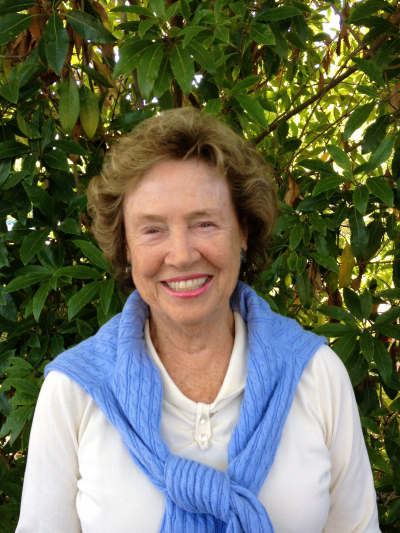 Marilyn S. Brown moved through life with grace, a loving spirit and open heart. Everyone Marilyn met would remember her radiant smile and a twinkle in her eye that brought light and warmth to the world. She passed away at her home in Portola Valley on October 11, aged 94 from complications of COVID-19 and dementia.

While Marilyn’s long and wonderful life began in San Francisco, she held fond memories of her early years spent in the Pacific Northwest, with her parents, Leonard and Marion Schwartz, and her younger brother, Frank. At age 12, the family moved to Southern California, where Marilyn later attended Anoakia Girls School. There she thrived academically as well as socially, and aimed to reach her goal of following in her father’s footsteps and attend Stanford University. Her youth was full of good friendships, and love and support from her family.

Marilyn went on to work hard and find success at Stanford, and received her degree in economics. In addition to her busy social life, Marilyn became very active in various student organizations at Stanford, and was elected as Secretary-Treasurer of her senior class. That year she met her future husband, Everett “Pete” Layman, Jr. After graduating in 1950, they soon married and settled in Palo Alto. Marilyn was a devoted mother and loved these years raising their three children, Erik, Karen and Janis. She enjoyed their summer trips to Lake Tahoe, and was actively engaged in supporting her children’s education, applying her leadership skills to serving as PTA president at their grammar, middle and high schools.

In 1975, newly single after her marriage to Pete ended, Marilyn carried on with determination, and developed her career as a bookkeeper and office manager for Alhouse Realty in Palo Alto. Soon after she met Allan Brown, a previous acquaintance at Stanford. They married and began a life together that would prove to be full of interesting travels and adventure, that included flying in a four-seat plane to see the polar bears in Canada, a river trip on Alaska’s north slope, a safari in Kenya, and an exciting exploration of the Iberian Peninsula. They had a shared passion for Stanford football and basketball games, and annual week-long hiking trips in the High Sierra with a circle of friends. The couple built a beautiful home in Portola Valley with a spectacular view of Windy Hill. There Marilyn enjoyed hosting her Stanford class reunion parties, as well as welcoming her beloved children and grandchildren, especially for festive meals during the holidays.

Later in life, Marilyn focused on spending time with her adoring family including their dear little dog Toby, playing tennis, weekly lunches with her brother Frank, and her work for environmental causes. Hiking and competitive tennis kept Marilyn young and active, and she continued playing until almost 90 years old, typically the oldest doubles competitor at the Foothills Tennis Club. Marilyn developed a passion for nature and wilderness, and became an ardent environmentalist. She was a longtime member of the board of trustees of the Sierra Club Foundation, and worked diligently in fund raising for the Yosemite Conservancy for ten years. The family was so proud of her efforts to support the completion of the Mariposa Grove Restoration Project, which will protect this beautiful grove of Giant Sequoias for generations to come.

Marilyn found her spiritual home in an area near Bridgeport, California, set in a lush valley at the foot of the majestic Sierra mountains. There, she found a quiet and peaceful place where she could “take nature in.” Marilyn was delighted when her family all gathered in Bridgeport for a special celebration of her 90th birthday.

Marilyn will be missed most for her loving and kind personality, her unwavering support for family and friends, and unbridled enthusiasm for life. She is survived by her husband, Allan Brown and their dog Toby; her three children, Erik (Sunny) Layman, Karen McDonald, Janis (Sandy) Freschi; her grandchildren Erika and Sophie Layman, and Peter and Brooke Freschi; and her three stepsons Davin, Steven and Bowen Brown, and their families.

In lieu of flowers, donations can be made in Marilyn’s name to the Yosemite Conservancy.

Photo Gallery
0 photos Upload a photo
Remembrances
0 entries Submit a remembrance
Make a donation
https://yosemite.org/giving/gifts-in-memory-honor/
About this site     Contact us