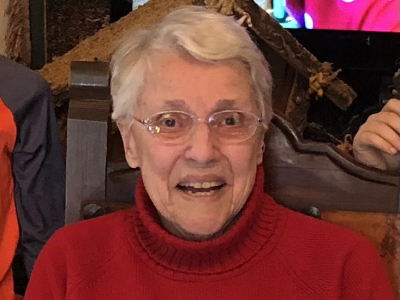 We honor the life of Judith (Judy) Anderson Falconer, who passed away April 27, 2022 at the Sequoias Retirement Home in Portola Valley, CA. Judy was born June 18, 1929 in Sacramento and grew up in Yuba City, CA. She graduated as valedictorian from Yuba City Union High School in 1947 and entered Stanford University. She met “the love of her life,” Bob Falconer, at the Freshman Jolly-Up dance and together they worked their way through Stanford, graduating in 1951, Judy with a BA in Social Sciences with honors and Bob with a BS in Electrical Engineering. Judy and Bob were married the following Sunday and five years later moved to Portola Valley, where they raised three children, Steve, Lorry and Rob, and lived in a series of houses before moving to the Sequoias in 2003. Judy devoted her energy to parenting, the PTA, the PV Library, Cub Scouts, Campfire Girls and especially as a founding member of Christ Church. She is survived by her children and their spouses (Pat, Tom and Patty, respectively), eight grandchildren, and seven great-grandchildren. All of us miss her!

Photo Gallery
0 photos Upload a photo
Remembrances
0 entries Submit a remembrance
Memorial service
A memorial service will be held at Christ Church, Portola Valley on August 21 at 12:45 pm.
Make a donation
In lieu of flowers, donations may be made to Christ Church, 815 Portola Road, Portola Valley, CA 94028 (Ph# 650-851-0224) Attn: Donation on behalf of Judy Falconer.
About this site     Contact us