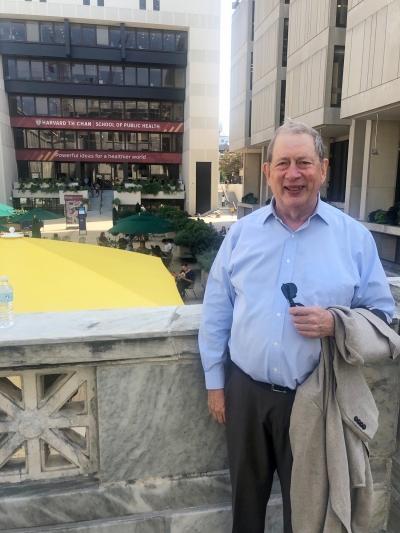 John C. Martin, former CEO of Gilead Sciences who helped develop the first once-a-day pill to treat HIV while at the helm of the company, died unexpectedly on March 30 after suffering head injuries from a fall the previous day. He was 69.

Martin is believed to have fallen while walking near Coleridge Avenue and Bryant Street on March 29, said Franklin Johnson, founder of Asset Management Company and a close friend of Martin, in an email. The Palo Alto Police Department confirmed in an email to this news organization that a man in his 60s appeared to have fallen in the area at around 6:30 p.m. The man was transported to a nearby hospital where he later died.

Martin first joined Gilead, a biopharmaceutical company based in Foster City, in 1990 as the vice president of its research and development department. But his most notable contributions to the company came after he was named CEO in 1996.

Of note is the development of Atripla, the first single-tablet regimen for treating HIV, which hit the market in 2006. The pill combined two of the most prescribed AIDS medications at the time — Gilead's Truvada and Bristol-Myers Squibb's Sustiva — and was set at a price of $1,100 a month.

Before, patients receiving antiretroviral treatment could take up to 32 pills a day, said Lou Lange, a partner at Asset Management Ventures and founder of CV Therapeutics, a Palo Alto-based biotech company that was later sold to Gilead in 2009 for $1.4 billion.

"If you missed doses, the HIV virus could mutate and become resistant," said Lange, who continued to work on other projects with Martin after the sale of his company. "So a single pill once a day is a huge step forward."

Founded in 1987, Gilead Sciences was a small pharmaceutical company with a burn rate and zero revenue, according to Clifford Samuel, the company's former senior vice president of Global Patient Solutions, who started working at the company in 1996 as a sales representative.

"We weren't making money or anything," Samuel said. "It was just a dream really."

Martin, who had a background in chemical engineering and organic chemistry and had done a brief stint at Bristol-Myers Squibb, joined Gilead in 1990 with the pioneering idea that nucleotides could be used as an effective drug for HIV treatment. (In 1989, a book titled "Nucleotide Analogues As Antiviral Agents" was published through the American Chemical Society. Martin is credited as the editor.) It was this belief that later led to Gilead's launch of tenofovir, trademarked as Viread, which was approved by the U.S. Federal Drug Administration as an anti-HIV treatment in 2001.

"He was a visionary that really understood medical science, drug development and could take the straightest path to success," Lange said.

Under Martin's leadership, Gilead also developed the first anti-influenza pill, Tamiflu, which was licensed to Hoffmann-La Roche, a Swiss health care company; and Truvada, which was approved by the FDA to treat HIV in 2004 and for HIV infection prevention in 2012.

But the company attracted scrutiny from health care providers and the federal government during its growth.

In 2014, Democrat lawmakers asked Martin to justify the company's $84,000 price tag of its hepatitis C drug, Sovaldi, which is equivalent to $1,000 per pill.

Five years later, shortly after Martin announced he was stepping down from his role as executive chairman, the Trump administration sued the company, alleging Gilead infringed upon patents owned by the U.S. Department of Health and Human Services in order to develop Truvada as an HIV-preventative drug. According to the New York Times, the Justice Department could seek billions of dollars in royalties for Gilead's previous sales of the drug, which brings in about $3 billion each year for the company.

Gilead rejected the government's complaint and has maintained that the patents were invalid.

"None of us who've been there need to speak on it," Samuel said. "We developed the drug; we invented it."

By 2011, Gilead accounted for almost half of the U.S. market for HIV drug production, according to the New York Times.

"As chief executive officer from 1996 through 2016, he steered the company through a period of remarkable growth," Gilead wrote in a statement announcing Martin's death.

During his time with Gilead, Martin also expanded access to HIV medication in developing countries. According to a 2015 company report, Gilead had signed agreements with 11 India-based pharmaceutical manufacturers to develop generic versions of its hepatitis C medicine for 101 developing countries, from Afghanistan to Zimbabwe.

Samuel, who led the company's program to make the company's medicine accessible to poorer countries, credits Martin for that initiative.

"You really have to care about the poor and the fact that the bulk of HIV are in poor developing world countries," Samuel said. "And that's what John did — that's what he convinced the board was the right thing to do."

Martin also started a foundation under his name with a mission to improve health care in "socially and economically-disadvantaged settings," according to the foundation's website. The nonprofit is based in Palo Alto.

"It funded a number of scientists' projects in the developing world," Lange said.

Born on May 7, 1951, in Easton, Pennsylvania, Martin received his bachelor's degree in chemical engineering from Purdue University, a master's degree in marketing from Golden Gate University, and a doctorate in organic chemistry from the University of Chicago.

His tenure in the pharmaceutical industry spanned at least four decades.

In 1978, he joined Syntex Laboratories, which was headquartered in Palo Alto. From 1984 to 1990, he was the director of antiviral chemistry at Bristol-Myers Squibb. Martin joined Gilead in 1990. He stepped down as CEO in 2016 but maintained a role in the company as executive chairman from 2016 to 2018.

Some of his accolades include the American Chemical Society's Horace S. Isbell Award, which acknowledges significant research in carbohydrate chemistry and biochemistry; the International Society for Antiviral Research's Gertrude B. Elion Award for Scientific Excellence; and a Lifetime Achievement Award for Public Service from the Institute of Human Virology at the University of Maryland School.

Martin is survived by his partner, Lillian Lou, two children and three siblings, according to Johnson. He was a resident of Old Palo Alto.