An Alternative View
by Diana Diamond
What I will remember about Ruth Bader Ginsburg
Sep 21, 2020 | 6 comments

Toddling Through the Silicon Valley
by Cheryl Bac
A Rainbow After the Storm
Sep 19, 2020 | 0 comments

"VistaCenterFoundationBenefit"
info incl in other photo caption Submitted by bobbi bon on Jul 25, 2017

With new deal, communities seek to cement partnership on land use concerns

After banding over shared concerns about Stanford University's growth plan, city and county officials in Santa Clara and San Mateo counties are preparing to sign a "Land Use Compact" that would sustain the newly forged partnership. Monday, 1:35 PM

The Chinese-owned mobile app WeChat, which has been the main communications lifeblood for local Chinese Americans, could see a mass exodus of its users after the U.S. Department of Commerce threatened to ban it from mobile app stores. Monday, 10:30 AM

High schools will stay online for second quarter of the fall

Students in the Sequoia Union High School district will continue learning at home for the rest of the fall semester due to COVID-19, the district announced in a statement Friday. Saturday, 4:19 PM

Last week, a small number of friends and relatives made their way to Aptos to celebrate the 100th birthday of Jean Rusmore, a former longtime Ladera resident and author of popular local hiking guides. Saturday, 10:17 AM | 1 comments

Guest opinion: A helping hand for residents in need during COVID-19
In an op-ed in the Sept. 18 issue, Trinity Church volunteer Laurie Hunter recognizes the volunteer work of Lucile Spurlock, an 88-year-old who is a regular driver for "Trinity Tuesdays, Season of Gleaning." Sunday, 8:30 AM

Modified downtown street closures to last through February
A pilot program to close some areas of Santa Cruz Avenue and allow restaurants and retailers to spread onto the sidewalks and parking areas has been extended through the end of February, per a Sept. 8 City Council decision. Friday, 9:21 AM | 4 comments

Inspired by family tragedy, Atherton siblings create book to teach kids about COVID-19
Siblings Sophia and Sean Nesamoney have written a children's book which explains the coronavirus pandemic to young children. Friday, 10:01 AM

Most fire evacuation zones in San Mateo and Santa Cruz counties can be repopulated, as Cal Fire removed additional evacuation warnings on Wednesday.
Friday, 11:36 AM

Menlo Park to launch study of municipal water rates
Menlo Park is due to start a new a five-year rate study for its water system, which could increase water rates in the future for households that receive water from the Menlo Park Municipal Water District. Friday, 11:25 AM

High school district board candidate drops out of race, citing need for more 'voices of color'

Jacqui Cebrian, a candidate for the Sequoia Union High School District school board Trustee Area E, has announced that she is dropping out in order to support candidate Shawneece Stevenson instead. Wednesday, 6:28 PM | 3 comments

At its Sept. 8 meeting, the Woodside Town Council voted 6-1 to adopt an ordinance limiting the hours that commercial leaf blowers can be used to the town's construction hours. Thursday, 11:32 AM | 3 comments

A landmark study published this week found a chemical suspended in the clouds of Venus that could be early proof of life on a planet previously thought to be uninhabitable. Wednesday, 12:29 PM | 3 comments

A group of civil rights organizations and residents filed a lawsuit against Palo Alto on Tuesday in a bid to repeal a contentious law that bans non-Palo Altans from visiting Foothills Park unless accompanied by a city resident. Tuesday, 4:51 PM | 2 comments

How to help the homeless and housing-insecure in the pandemic? Local leaders compare tactics

A panel of local leaders convened Saturday to share their advice on how to help the homeless and housing insecure through the pandemic as the end of the statewide eviction moratorium draws closer. Tuesday, 11:04 AM

Two San Mateo County Parks Department employees describe how they've responded to the CZU Lightning Complex fires, which will alter the landscape of some of the Peninsula and South Bay's most iconic forests for the foreseeable future. Tuesday, 11:39 AM | 1 comments

Want to get to know your local candidates? Here's a calendar of election debates, forums

We've compiled a list of local election debates and forums taking place virtually for Midpeninsula voters ahead of the Nov. 3 election. Monday, 11:20 AM | 1 comments

By Wednesday, Bay Area will be under Spare the Air alerts for 30 consecutive days

Minimal flames and mop up: CZU Lightning fire is 89% contained

View past issues and special publications

Get the most important local news stories sent straight to your inbox daily.
Sign Up
Top Blogs

Premarital and Couples: What Does Sex Mean to You?
By Chandrama Anderson | 0 comments | 1,974 views

'Ignoring what's wrong has never made anything right'
By Diana Diamond | 4 comments | 1,808 views

The MP City Council Changes Downtown Street Closures Again and Extends the Trial Into 2021. Is this Enough?
By Dana Hendrickson | 11 comments | 1,486 views 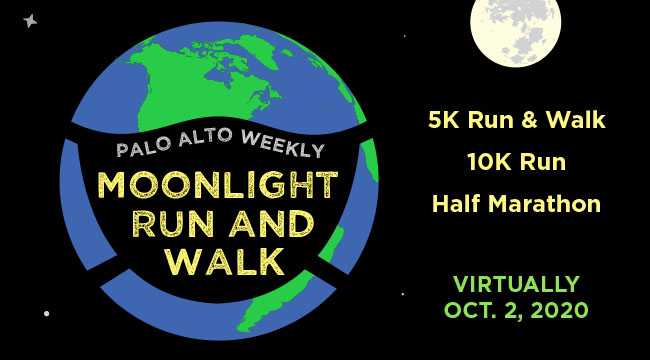 The 36th annual Moonlight Run and Walk is Friday evening, October 2, wherever you are! Proceeds go to the Palo Alto Weekly Holiday Fund, benefiting local non-profits that serve families and children in Santa Clara and San Mateo Counties. Join us under the light of the full Harvest Moon on a 5K walk, 5K run, 10K run or half marathon.