Two-thirds of votes have been counted 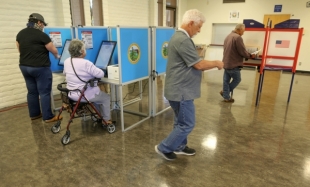 Updated election results for Measure P, a parcel tax measure for the Portola Valley School District that is currently falling short of the votes needed to pass, will be delayed because of restrictions on the vote counting process due to the novel coronavirus, known as COVID-19.

The elections office website previously indicated that officials would post updates on vote counts from the March 3 election at 4:30 p.m. on March 17, 20, 24 and 27. Due to the countywide shelter-at-home order issued on Monday, March 16, a team of minimal staff will be at the elections office on March 20 and 27 to complete the processing of these ballots, said Jim Irizarry, San Mateo County's assistant chief elections officer and assessor-county clerk recorder, in an email.

"Our results reporting process requires two person integrity in our tally room, with both staff members watching the same monitor," Irizarry said. "Given the necessarily close quarters, the fact that the tally room has limited ventilation, and the number of remaining ballots, we made the decision to limit further results reporting to the Statement of the Vote. This is both for our staff's safety, and to ensure our key personnel are healthy and available to continue in their roles during the preparation for the Presidential General Election."

The remaining ballots should be able to be counted during the two designated tallying days, and if that is not the case, the county will have staff members count votes on additional days, he explained. Certification will proceed on schedule no later than April 1, he said.

The only ballots still being processed fall into two categories. The first are those that are challenged due to a missing or non-matching signature, Irizarry said. The county will be resolving challenged ballots and counting them until two days before certification. He expects the county will be adding to the total number of ballots up until around April 1.

The second category is ballots cast under conditional voter registration, which require elections staff members to review the registration to ensure it was valid before the vote is counted. The majority of these ballots have been processed, and those that remain are awaiting information from other counties, he said.

"We appreciate the county's continued effort to count every ballot and certify the election," said Portola Valley School District Superintendent Roberta Zarea. "We understand that this is especially difficult in these challenging and unprecedented times."

With 67.77% of the votes counted by the afternoon of March 13, 64.43% of voters supported the measure, which requires a two-thirds, or 67%, voter majority, county election officials reported.

The numbers have shifted only slightly from the last results released in the early morning hours of March 4, when the measure had 63.46% voter approval. There were 1,525 more ballots counted between then and March 13.

Measure P would update the district's Measure O parcel tax, which expires in June 2021. It would continue the tax at its current rate of $581 per parcel in its first year, then increase it by 3% in each following year for the duration of the tax, which would expire in 2028.

The current parcel tax generates about $1.2 million annually for Portola Valley School District classroom programs and teaching staff. The yearly boost in the tax would amount to an additional $17 to $21 per parcel annually, said district Chief Business Officer Connie Ngo.

In addition to Portola Valley residents, the district includes Woodside residents who live in the Skylonda and Skywood Acres neighborhoods and off Philips and Family Farm roads, and part of Mountain Home Road. See a map of the school district boundaries here.

The current tax, Measure O, funds advanced math, science and technology programs; reading and writing programs; art and music programs; reduced class sizes; and retention of teachers for the district's two schools, Ormondale and Corte Madera, according to the district website. District staff asserts that the measure "must be renewed" to maintain these programs.

Keep counting until you get the results you want.

You already validated signatures at the schoolhouse for walk-ins..
Maybe you should require ID's to vote?

Starting to smell fishy to me.

Something is rotten in the state of Denmark!

The first few seconds after awakening; before I remember the virus
By Chandrama Anderson | 0 comments | 2,530 views

Can you stay healthy without making more trash?
By Sherry Listgarten | 2 comments | 1,823 views