Restaurants start to shutter, as public health restrictions increase and dining out declines 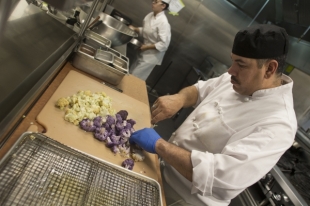 Cook Daniel Garcia prepares cauliflower at Vina Enoteca in Palo Alto, which is closing temporarily due to the financial impact of the coronavirus. Photo by Ben Hacker.

The Santa Clara County Public Health Department notified restaurants on Friday that they must adhere to new legal orders to slow the spread of the coronavirus -- including social distancing and mandatory conditions for gatherings of less than 100 people -- prompting several local restaurants to decide to close temporarily.

The restrictions apply to all restaurants, bars, cafeterias and other food facilities in Santa Clara County, both during normal operations as well for special events or gatherings. They do not apply to grocery stores or certified farmers' markets.

"As a business that serves food and/or beverages, the county requires your assistance to reduce the spread of the novel coronavirus (COVID-19) in our community," the Public Heath Department and Department of Environmental Health wrote to food businesses on Friday.

"The primary way that the virus spreads is by respiratory droplets (e.g. when someone coughs) or when a person touches a contaminated surface or object and then touches their eyes, nose or mouth. In these ways, the virus could spread from one employee to another, from an employee to a patron, or from a patron to an employee."

Santa Clara County issued the orders as its number of coronavirus cases continued to climb, with 91 confirmed cases as of Friday, March 13, including two deaths.

The new restrictions on public and private gatherings of 35 to 100 people — which includes employees — and practicing social distancing by keeping people at least six feet apart will prove challenging for some restaurants to implement. Within a day, a growing number of local restaurants -- including the Michelin-starred Chez TJ in Mountain View and Palo Alto restaurants Maum, Zola, Italico, Bistro Elan and Pampas -- chose to close temporarily.

"Given the increased advisements against public gatherings, we have determined it is in the best interest of our community to temporarily close Zola in efforts to 'flatten the curve,'" Zola owner Guillaume Bienaime wrote on Instagram on Saturday. "Despite this being a difficult personal and fiscal decision, our mission is to create a space for people to come together and this is precisely what we need to avoid for the time being.

"You, our patrons, are our livelihood and we hope that you understand and support this decision and do your part as well."

He plans to reopen Zola on April 7. Zola employees will have to file for unemployment.

"We don't have the funds to keep everyone afloat," Bienaime said. "Of course I will help where needed. We hope the government at all levels will help us later."

Michael and Meichih Kim of the Michelin-starred Korean restaurant Maum said they will close for at least three weeks, effective immediately.

"We will use this time to reflect and to show solidarity with citizens around the world by practicing social distancing," they wrote in an Instagram post.

Italico on California Avenue closed Saturday, March 14, until further notice, the owners announced on Instagram. Terun, their first, nearby pizzeria, remains open but they have had to let go 22 employees.

Executive Chef Jarad Gallagher said that for Chez TJ, with its small kitchen and intimate dining room, the new restrictions on numbers for gathering and social distancing make closure "necessary." Gallagher said he also feels an "ethical" responsibility to make sure his staff feel safe at work. He hopes to reopen in three weeks and will reassess then.

In the meantime, Gallagher and Wise Goat Organics (which is run by his wife) will be hosting a pop up at Chez TJ on Wednesdays. They'll serve a small menu of "healthy, organic foods," Gallagher said, including soups, stocks and Wise Goat's fermented foods. The pop-up will be at Chez TJ (938 Villa St. from 11 a.m. to 6 p.m.)

Many local restaurants are already struggling to stay in business as fewer people dine out. Palo Alto Italian restaurant Vina Enoteca decided to close temporarily this weekend; owner Rocco Scordella predicted that he wouldn' be the last to do so. Restaurants are also shuttering throughout San Francisco, New York City and Seattle.

Restaurants in San Mateo County, which issued on Saturday a three-week ban on gatherings of more than 50 people, also started to close temporarily, including the longtime Buck's in Woodside and Cafe Borrone in Menlo Park.

Santa Clara County is instructing restaurants to "under all circumstances, practice social distancing by keeping patrons' tables as far apart as practical while seated. Leave empty tables in between patrons if space allows."

In response, State of Mind Public House and Pizzeria in Los Altos, for example, is limiting the number of diners in the restaurant at any given time and won't be allowing people to "gather without seats," co-owner Lars Smith said. They removed three tables and half of the 132-seat restaurant's chairs and stools on Friday night to allow for social distancing. State of Mind and The Post in Los Altos both started offering curbside pick-up for takeout orders after the county's new orders.

"We are going to try and operate like this as long as it is safe for both guests and staff," Smith said. "We are also very aware of the possibility of being required to close for a period."

Zareen's in Palo Alto and Mountain View is closing the station where diners can usually serve themselves condiments and grab utensils and accepting credit cards for any payment amounts to limit the exchange of cash, owner Zareen Khan said in an Instagram post. The restaurant is also checking staff members' temperatures daily with touchless thermometers.

Many restaurants are turning their focus to delivery as dine-in sales drop. County public health officials told food businesses Friday that giving customers the choice to have food left at their doors or curbside "may prove beneficial to your operation."

Many third-party delivery apps such as Postmates and DoorDash have started offering no-contact delivery. DoorDash and Caviar are also distributing hand sanitizer and gloves to their drivers.

Ted Kim, owner of Steins Beer Garden in Mountain View, said the challenges of the public health restrictions have been compounded by the fact that there's been little information yet about how and when small businesses will get emergency financial support. (The U.S. Small Business Administration has said it will work directly with state governors to provide "targeted, low-interest loans" to small businesses that have been severely impacted by the coronavirus.)

"I understand the need for precaution but why aren't these new restrictions coupled with information on where to get financial emergency aid to help us through this?" Kim said. "It's impossible for us to continue like this."

Restaurant staff must wash their hands with soap and water for at least 20 seconds at the following times, the county stated:

- When entering the kitchen

- After touching their face, hair, or other areas of the body

- After using the restroom

- After coughing, sneezing, using a tissue, smoking, eating, or drinking

- Before putting on gloves

- After cleaning, bussing tables or touching any items that patrons have used

- After engaging in other activities that may contaminate the hands

Restaurants should also minimize touching ready-to-eat food with bare hands, assign an employee to keep soap and paper towels stocked at handwashing stations at least every hour, post additional visible signage for customers to wash their hands frequently and provide hand sanitizer and/or wipes for patrons to use, the county said.

Food businesses should avoid accepting reusable utensils and containers from customers, which many local coffee shops have started doing with personal cups or mugs.

Any employee who is experiencing any fever and respiratory symptoms should stay home for three days after they are symptom-free to prevent the spread of any virus, the county told restaurants. Restaurants should “maximize flexibility in use of sick leave to facilitate such time off,” the guidance states.

A ban on gatherings of more than 100 people also went into effect at midnight on March 14.

The restrictions may be modified or extended and new ones imposed, the county said.

Find comprehensive coverage on the Midpeninsula's response to the new coronavirus by Palo Alto Online, the Mountain View Voice and Almanac here.

The first few seconds after awakening; before I remember the virus
By Chandrama Anderson | 0 comments | 2,532 views

Can you stay healthy without making more trash?
By Sherry Listgarten | 2 comments | 1,826 views

Think about helping others in our coronavirus-affected area
By Diana Diamond | 3 comments | 1,712 views