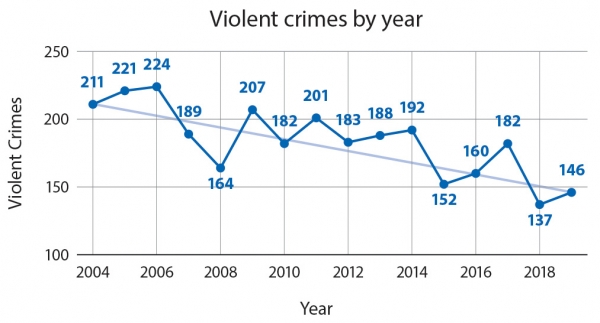 Graph showing the number violent crimes per year in Menlo Park from 2004 to 2019.

Menlo Park's violent crime rate has been showing a downward trend since 2007, according to Police Department crime statistics released recently that cover the last 16 years.

The yearly total of violent crimes — including homicide, rape, robbery, aggravated assault, domestic violence, officer assault, hate crimes, and crimes against seniors — rose slightly or moderately for some of those years, peaking at 221 in 2006.

But the number of violent crimes then trended downward, hitting a low of 137 in 2018. Last year, the figure rose to 146, the department's statistics show.

In a conversation with The Almanac, Menlo Park Police Chief Dave Bertini explained that the reason for the decline is multifaceted, likely ranging from changing economics in the area to changes in law enforcement practices. In particular, the opening of Facebook's headquarters on Bayfront Expressway in 2015, and the police department's crackdown on gangs in the Belle Haven neighborhood between 2009 and 2012, may have been factors, he said.

Meanwhile, the city has seen an increase in thefts in recent years, including car break-ins, Bertini said. But he pointed out that thefts of many kinds have increased across the Bay Area in general.

According to the police department's 2019 statistics, theft, including auto burglary, increased by 34% from 2018 to 2019. Stolen vehicles increased by 24% over that period, while burglary decreased by 4%.

Bertini said that the department's crime statistics archive reaches back only to 2004, but the FBI maintains statistics that go farther back.

According to data available on the FBI's Uniform Crime Reporting Statistics website, violent crime in Menlo Park has come down significantly since 1987. Although using a narrower definition of violent crime (murder and non-negligent manslaughter, rape, robbery, and aggravated assault), the FBI shows the city with a peak of 231 violent crimes in 1987, eventually dropping down to 52 by 2014.

Bertini said that gang violence in the city hit a recent peak around 2009 to 2012, when a gang known as the "Taliban" existed in the Belle Haven neighborhood and was involved in many gang-related shootings with its rival, the "DaVill" gang, in East Palo Alto. Police from Menlo Park, East Palo Alto, and Palo Alto collaborated in several crackdowns during that time, quelling the violence, he said.

In terms of violent crime, he said, the Belle Haven neighborhood is "100% different now."

Bertini said that these days the police department hears from residents much less about violence and a lot more about other concerns.

"Now we have traffic problems," he said with a smile.

I've seen dramatic changes in Belle Haven over time - 25 years ago, when I was house sitting, I saw people dealing drugs with impunity from the grassy median on Ivy Avenue - at 3 p.m. in the afternoon. The police deserve a fair share of the credit for these improvements. I hope it continues to be a safe home for the wide variety of people who live here.

But I keep hearing scare stories from the fringe posters - gotta get a gun and defend against the hordes.

The first few seconds after awakening; before I remember the virus
By Chandrama Anderson | 0 comments | 2,539 views

Can you stay healthy without making more trash?
By Sherry Listgarten | 2 comments | 1,830 views

Think about helping others in our coronavirus-affected area
By Diana Diamond | 3 comments | 1,719 views