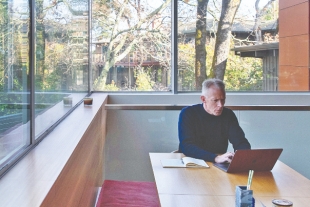 26 people like this
Posted by PV Resident
a resident of Portola Valley: Woodside Highlands
on Jan 16, 2020 at 3:50 pm

I agree with Mayor Aalfs that it is time for fresh ideas. Councilmembers Derwin and Wengert have been on the council 15 years and Mayor Aalfs close to 10. Time for these lifers to step aside. Our towne needs fresh leadership that better represents the interests of the residents. Thank you all for your service, it’s time to pass the torch.

Honestly, the last thing we need is another extremely opinionated person to head up the Town Council. Jeff is a bright guy with a lot of ideas, but he pushes very hard, and clearly has already got some set, vigorous goals to accomplish. Jeff, perhaps you could stop salivating long enough to ask what the people of PV want, and not just what YOU think should happen. A solar grid? What do you mean? Big difference between solar panels on the roof of the library and an actual ground-based solar grid.

Your personal opinion on the location of the Blue Oaks parcel for affordable housing is truly unnecessary. Los Trancos is not a remote street, and it has access to both Alpine Road and Page Mill. As for the Stanford Wedge, I don't love your attitude of how we should just suck it up and deal with it. This is our town, not just yours, so stop with the dictatorial attitude of how things are going to go.

I agree with the above poster. Time for some new blood in the Town Council. Many of us have just had it with people who insist on abusing their power to push their own viewpoint of what should happen.

This self-important politician forced a change in utility provider upon the entire town, without seeking input from residents. As it turns out, he is chairman of the same imposed energy entity. Also, the town selected a trash contractor on a no-compete basis, selected by yet another contractor, enabling an effective 14year Monopoly. Thomas Paine would be inspired to author more revolutionary works.

Can you give me directions on how I can get to Page Mill from Los Trancos Road? It looks to me like the two roads never join???? I would love to use that as a shortcut if it truly exists.

Thanks for the comments! I completely agree about listening to more of our Residents' ideas. In fact, I have a coffee hour scheduled for next Thursday, the 23rd, from 9 to 11 in the Resource Room of the Portola Valley Libary. All are welcome. Please come by--I'd be happy to meet you in person. If you can't make this one, I will be holding more over the course of the year.

Also, for the record: Peninsula Clean Energy is non-profit, Joint Powers Authority. I represent Portola Valley, which is a member of the JPA, on the Board, and I currently act as Board Chair. My work for PCE, like my work for Portola Valley, is completely unpaid. Also, the Council voted, unanimously, in a public session, to join PCE, after several study and discussion sessions (all public) over the course of a year. I hosted a number of information sessions during that time, looking for public input. I have pointed this out on multiple occasions because I don't like the appearance, or the insinuation, of corruption to go unchallenged.

Report Objectionable Content
Email Town Square Moderator
10 people like this
Posted by Danna Breen
a resident of Portola Valley: other
on Jan 17, 2020 at 6:47 pm

I have such a problem with the Almanac policy of letting people post anonymously. So counterproductive. I feel challenged by some of these letters.
Every person on town council has their interest and strength which they bring to their leadership when they become Mayor. Jeff’s passion and interest is sustainability so yes be prepared to see this emphasis during his year long lead.
People want to live in Portola Valley, because our government has made it this way. As always, people should attend council and committee meetings which relate to their concerns when they want to express themselves, stand up and be heard. THAT is productive and frankly that’s how we do things here. It was a really tiring year in PV let me tell you, but so many of us showed up and voiced our opinions,. We were respectful of the process and the council and in the end we were heard, We all don’t always agree, but In the end I think we can all agree that PV is wonderful.

Report Objectionable Content
Email Town Square Moderator
12 people like this
Posted by PL
a resident of Portola Valley: Westridge
on Jan 17, 2020 at 6:56 pm

We don’t need to make accusations. The fact is that we are not looking for activist Mayors. California’s government is bad enough at slowing down housing development with its outrageous regulations. We don’t need a small town mayor adding more. The transfer of funds forcing moves to green energy abetted the damaging fires we have had. Climate change had nothing to do with the horrible fires. It was poor management and well intentioned regulations that led to the fires. PG&E did not perform their maintenance and the folks in Sacramento did not allow proper clean up of the forest. Of course no individuals responsible for this travesty were held liable.

Report Objectionable Content
Email Town Square Moderator
12 people like this
Posted by Gas Stoves Are Splendid
a resident of Portola Valley: other
on Jan 17, 2020 at 7:52 pm

I know Jeff, and I think he is an earnest, thoughtful, and decent man.

My one piece of cautionary advice for him is: WATCH OUT FOR UNINTENDED CONSEQUENCES.

A good example is the latest California law, AB5. It was created to “help” (actually, get at) Uber and Lyft drivers. Instead, it has severely messed up the business lives of many writers, journalists, bloggers, actors, musicians, and other ad hoc professions.

I hope he and the council don’t enact any “AB5-like” measures in PV.

I must agree with comments above made by Danna Breen, Jeff Aalfs and Bill Wall. I find it instructive that all of the negative comments above were posted by people (or bots?) who chose not to use their names. These mean-spirited, mostly snarky, negative posts contained, variously, inaccuracies, ad-hominem attacks and deceptive arguments.

These anonymous attacks mischaracterize Jeff Aalfs, his colleagues and our Town of Portola Valley.

Who was it who said, “a lie can travel halfway around the world before the truth can put its pants on”?

As one who has lived in Portola Valley for more than 65 years, I know that our Town is well governed by many dedicated volunteers and an active public, including Jeff Aalfs and the other members of our Town Council.

Where to start in correcting some of the falsehoods put forth by our unnamed friends?

In the interest of brevity, I will not attempt to address all the misleading statements made, but just a high- (or low-) light or three.

1) Perhaps first that the people of Portola Valley don’t want an “activist” Mayor. While “activist” is not a word I would use to describe Jeff Aalfs—I would call him a gentle, thoughtful open-minded man, a good dad and husband and a dedicated community volunteer—I do think that the people of our Town want a Mayor and other leaders, who are committed to facing the crises of our time. Foremost among these is climate change. People in our Town want action on addressing this crisis, not mere lip service, or worse an apologist for PG & E, the Koch brothers or big petroleum or coal.

2) The suggestion that the PG & E caused wildfires where the fault of environmental regulations is just silly. PG & E has spent years resisting sensible safety measures such as undergrounding of electrical lines—or even proper record keeping about potential problems. The scale of their irresponsibility is breathtaking. PG & E has spent big money on lobbying and on political contributions, rather than investing in sensible maintenance and hazard prevention. If one doubts this, visit the neighborhood PG & E barbequed to our north in San Bruno.

If government shares any responsibility for this, it is in allowing regulatory capture to occur, which resulted in the PUC being far too soft on PG & E for years. Also, government should have taken more aggressive action on campaign finance reform to limit the power of moneyed interests such as PG & E.

3) The idea that anyone was “forced” by our Town Council to use cheaper, cleaner power by Portola Valley’s Town Council in some kind of secret process is laughable. If our nameless friends wish to pay more for dirtier PG & E power, they are free to do so. They can sign up for it if they so desire.

Speaking of our Town’s democratic governance, all decisions are made in the open with the opportunity of extensive public input. If one is unaware of this, it is because one did not bother to pay attention or to participate. Democracy is hard work; it takes time and involvement.

As one who spent time in the old Soviet Union, I can attest that lack of democracy can be quite restful—for a while—but it is not an alternative I would choose.

If our anonymous friends disagree with this or any of what I have said, perhaps they should step-up and run for office. But I have some news for them. If they do throw their hat(s) into the electoral ring, they will actually have to use their real names; one still cannot be elected to office in California under a pseudonym—or as a corporation or LLC.

Report Objectionable Content
Email Town Square Moderator
8 people like this
Posted by Dave Ross
a resident of Portola Valley: Brookside Park
on Jan 19, 2020 at 9:43 am

In my opinion, one could not ask for a better representative government than Portola Valley's Town Council. All its members are elected, and every member is an accessible resident in the community. They don't go away to Sacramento or DC to make legislation - they live and serve right here in Town, and anyone with a concern, a beef or an idea can call them up, visit or send an email. PV's governance is by people with strong local ties, who care little about party affiliation or ambitions for higher office. We do this because someone needs to, and we feel better about our selves and our community by stepping up to share the burden.

Town Council membership is open to all residents, but few stand for election. Why? Because it is a heavy commitment of time and energy, for no gain except the satisfaction of participating in the effort to make and keep PV a great place to be. And, of course, there are the anonymous trolls.

Danna Breen and I share opinions about anonymous complainers. Perhaps mine are a little stronger. In my view, folks who post ad hominem, negative and snarky (and usually incorrect) comments under the cover of anonymity don't deserve the attention they seek. As to Danna's suggestion to show up, and Jon Silver's suggestion to run for office - both are excellent ideas. I suspect the people posting negative comments here are either not really residents or are too lazy (or cowardly) to offer meaningful participation, who don't want to identify themselves because they are not ready to stand by their remarks.

From the owner of LV Mar and La Viga, a Palo Alto restaurant inspired by Mexico City
By Elena Kadvany | 4 comments | 3,754 views

Can you Pay to Reduce your Carbon Footprint?
By Sherry Listgarten | 10 comments | 2,586 views

You Can Help: Scents and Migraines
By Chandrama Anderson | 1 comment | 2,187 views