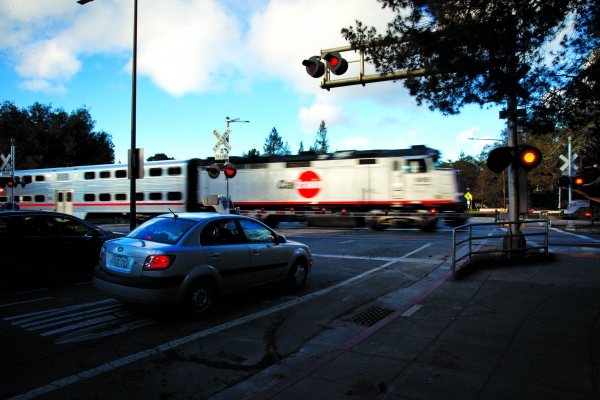 Eastbound traffic on Ravenswood Avenue waits while Caltrain travels south toward Palo Alto during the evening commute. Menlo Park is exploring options to separate the roads from the rail line at existing rail crossings throughout the city. (Michelle Le/The Almanac.)

I'm not sure that $260K is going to tell folks anything different than a back-of-an-envelope study to say- Can you ramp up from the county boundary at the creek for a delta of 10' in the short length we have? Can you ramp up the full 18' from Watkins and not wipe out Encinal and Glenwood? You'll quickly see the answer is no and the Council is being bullied by the pie-in-the-sky, Popular Mechanics reading crowd, happy to waste our tax dollars while slowing everything down.

@really. I listened to the study session last night and the fully elevated grade separation alternative appears only to require that the Oak Grove and Ravenswood crossings be fully elevated. And that should allow the northern and southern grades can be built well within city boundaries. Where they start depends on what is done at Glenwood and the grade percentage Caltrain will approve. The study will show what's possible. Council, city staff and AECOM know what they are doing. You can of course share your knowledge with them.

I agree that what the viaduct looks like matters, but the sound is going to travel a lot farther than the sight. Elevated freight trains running through your neighborhoods? Remember, this is not a track for cute mini electric cabs. The freight trains are big, heavy, and diesel. Now imagine the vibrations and the sound that will be transmitted.

Still only worried about what this will look like?

Remember that both grade separation alternatives - hybrid and fully elevated - require elevated tracks. Also, the scope of work for the study includes noise and vibration evaluations performed by subject-matter experts.

The degree of elevation matters because interference from the built environment is the main thing decreasing sound transmission. While it's helpful to study and measure the noise, even better would be real-world examples of quiet elevated freight trains. How quiet is it by the elevated tracks up and down the Peninsula? If there is new sound and vibration dampening technology, where is it deployed?

Report Objectionable Content
Email Town Square Moderator
5 people like this
Posted by TBM
a resident of another community
on Jan 16, 2020 at 9:02 am

While on paper the Northern ramp could begin at the Atherton border, it will be financially and politically challenging to extend the temporary shoo-fly track north of Encinal Avenue. Beginning the ramp South of Encinal will be the construct-ability path of least resistance.

With a slight depression of Alma there is no reason that the Southern ramp up could not begin at the University Ave station and then eliminate the Palo Alto/Alma grade crossing - a true win-win situation.

Report Objectionable Content
Email Town Square Moderator
5 people like this
Posted by Open-Minded
a resident of Menlo Park: other
on Jan 17, 2020 at 4:43 pm

The FEGS proposed study will perform noise analysis at actual locations along where tracks would be elevated here in Menlo Park and factor-in both the new trains that will use the Caltrain system and train system sound mitigation technologies. Once we have the facts, assumptions and analysis residents can either accept, question or challenge them. This approach sounds reasonable and I expect it's done is whenever tracks are elevate. You can research them if you have interest.

Report Objectionable Content
Email Town Square Moderator
7 people like this
Posted by Reality Check
a resident of another community
on Jan 18, 2020 at 3:47 am

Here's are some articles about how well the communities/neighbors in Melbourne who had the same concerns that are being raised here are liking their new viaduct (and, yes, it can and does carry the occasional freight train):

More than a year on, has 'sky rail' turned suburbs into ghettos?
Web Link

@Reality Check. Good links about the positive sides of existing elevated rail systems. Also worth noting the fully elevated track is only proposed between Oak Grove and Ravenswood - and possibly extended to Glenwood. So, the area under the tracks in downtown near the train station would be open. That seems like a good idea. Better east-west connectivity for bicyclists and pedestrians.

I have found studies to be optimistic -- technology, deadlines, impacts. Once the tracks are built, there is no going back. I think any analysis needs to say what if anything can be done if (when) the noise and vibration are worse than the study predicted.

This happens *all the time* with development. Developers find studies that will say just about anything, then they get their way and move on. Everyone else is left holding the bag.

Nobody that I know who lives near an elevated train likes it. It's just so weird that you and some others are looking forward to that. There just is no new magic that keeps these enormous trains so high up quiet.

Report Objectionable Content
Email Town Square Moderator
3 people like this
Posted by Open-Minded
a resident of Menlo Park: other
on Jan 18, 2020 at 10:33 pm

An EIR will be required just like any large-scale project and mitigation measures required, if necessary, BEFORE this is approved and AFTER it's required.

" It's just so weird that you and some others are looking forward to that."

The FEGS alternative is superior to the alternatives so I will prefer it IF the noise and visual impacts are minimal. If not, I would not support it.

I appreciate your concerns but will not pass judgement before the study and EIR are completed.

Do you know if Melbourne RR is next to private property where people live? From the pictures it looks like public land on both sides. Here, people live next to the RR. I wouldn't want a raised train taller than my house.

Report Objectionable Content
Email Town Square Moderator
3 people like this
Posted by Open-Minded
a resident of Menlo Park: other
on Jan 18, 2020 at 10:34 pm

An EIR will be required just like any large-scale project and mitigation measures required, if necessary, BEFORE this is approved and AFTER it's completed

Report Objectionable Content
Email Town Square Moderator
6 people like this
Posted by Reality Check
a resident of another community
on Jan 20, 2020 at 12:09 am

Someone asked if Melbourne's aerial (viaduct) grade separations passed by homes. Of course they do. There are lots of homes between stations ... we're talking about a corridor similar to Caltrain's with both passenger and freight ... and even the occasional special steam excursion for railfans.

Suburban homes served by the newly elevated rail lines are visible in at the 2:44 mark of the following video: Web Link

And if you read the article I linked above, there are resident opponents who actively fought the viaducts who now admit that they actually *like* them now. Here it is again:

More than a year on, has 'sky rail' turned suburbs into ghettos?
Web Link

Report Objectionable Content
Email Town Square Moderator
4 people like this
Posted by Neil Shea
a resident of Menlo Park: other
on Jan 20, 2020 at 8:43 am

Looking at the videos from the very nice project near Melbourne Australia, I believe the consultant and the city will need to create great visuals and ideas of how to use the space under the tracks, for park/open space, north/south trail avoiding El Camino, open pedestrian access east/west, parking, coffee shop, etc.

Without good visuals many neighbors may make negative assumptions as happened in Melbourne, despite people loving the final result.

Report Objectionable Content
Email Town Square Moderator
5 people like this
Posted by Reality Check
a resident of another community
on Jan 20, 2020 at 11:42 am

In Menlo Park's case, the contemplated "fully-elevated" viaduct alternative would only be across downtown. "Fully elevated" in this case, about 20 feet, means high enough to allow Ravenswood and Oak Grove to pass underneath with 15.5-feet of clearance and without having to lower them and the adjoining streets (Alma, Merrill, Garwood), thereby avoiding very disruptive and costly utility relocations. This also results in newly-created open space and connectivity underneath the viaduct and station across the downtown area.

The tracks would gradually slope back to their current ground level north of Oak Grove and south of Ravenswood (where they already rise onto a tree-screened berm along Alma going toward Palo Alto starting at Burgess Park).

20 feet is actually lower than most any two-story house roof. So if you have any two (or more) story houses in your neighborhood, you've got a feel of what 20 feet (or more) looks like (and from how far away those are no longer visible due to trees, bushes and other neighborhood features). However, outside of downtown, the tracks will be significantly lower as they slope back down to their current grade on berms to the north and south. As the study will likely show, they'll not even be visible over a backyard fence when you get as far from downtown as Encinal.


Report Objectionable Content
Email Town Square Moderator
12 people like this
Posted by really?
a resident of Menlo Park: other
on Jan 21, 2020 at 9:09 am

Has anyone bothered to see what 'elevating the tracks' means to our rail authority? Look what's being done at Hillsdale. It's not dainty light-rail viaducts. It's big, heavy, earth-moving civil engineering projects with lots of width to achieve modest grade separation, serving a bigger population and a larger jobs center, and is engineered for heavy freight (which we would have to be as well). This was not paid for with regional pocket-change from behind the sofa.

The more we flap our gums about magic tunnels and bridges, the less likely we'll get anything we can manage in my lifetime.

I'm confused by the enthusiasm for elevated rail. Why would we want to build the equivalent of an elevated freeway in this day and age, and alongside residential neighborhoods? I appreciate the lighter, modern example in Vancouver shared by "Reality Check," but even those give you a good idea of the massive structures that are required. Tons of concrete and rebar, or tons of steel. Major visual impact. Menlo Park is an official Tree City, not an industrial district on the way to somewhere else.

Cities are tearing down elevated freeways, as this story discusses:

To my mind, Betsy Nash is showing leadership and fiscal prudence by trying to move forward with plans for grade separation instead of slowing it down by commissioning (yet another) expensive study.

From the owner of LV Mar and La Viga, a Palo Alto restaurant inspired by Mexico City
By Elena Kadvany | 4 comments | 3,755 views

Can you Pay to Reduce your Carbon Footprint?
By Sherry Listgarten | 10 comments | 2,586 views

You Can Help: Scents and Migraines
By Chandrama Anderson | 1 comment | 2,187 views