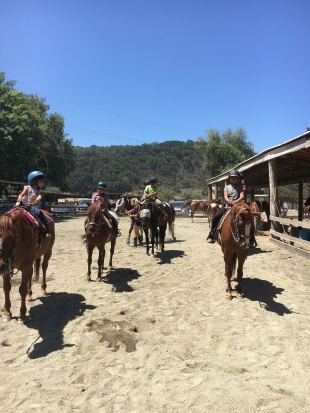 LifeMoves programs for homeless kids have provided summer camp experiences, such as horseback riding and other outdoor activities, as well as academic support. Photo courtesy of LifeMoves

By Jeannie Leahy, director of grants and contracts at LifeMoves

Homelessness is on the rise in cities across the nation, partially due to high housing costs, a situation all too familiar to residents of the Bay Area. In Silicon Valley, the homelessness crisis is particularly severe, where high rents and limited affordable housing options contribute significantly to the levels of homelessness.

Like many families, Tim never imagined his family would become homeless.

Tim, a 33-year-old Army veteran with a wife and a 6-year-old son, struggled with the transition from military to civilian life when he returned from a tour in Iraq. He became addicted to drugs. Eventually, he became suicidal and received treatment for post-traumatic stress disorder (PTSD).

After his treatment, things started to look up: Tim found a job, met his wife and they had a son. Then, misfortune struck again when Tim lost his job after his company went out of business. Although his wife worked, she did not earn enough to keep up with the high cost of rent.

With nowhere to go, the family stayed with relatives, and on occasion, in their truck. Finally, Tim called the 2-1-1 hotline as well as the Office of Veterans Affairs, and the family was referred to LifeMoves|Haven Family House in Menlo Park.

Tim and his family moved into their own two-bedroom apartment at Haven Family House, and immediately got to work on finding stable housing and new employment. He worked closely with his case manager, who is also a military veteran and could relate to his struggles.

With help and support from LifeMoves, Tim found a new job, his family received a Housing Choice Voucher (Section 8), and they recently moved into their new home in the East Bay.

"LifeMoves helped us tremendously from day one," Tim says. "Things immediately started to turn up for us. Everyone welcomed us warmly, and it felt like a huge weight lifted off my chest. I hope I can help people some day in the way that LifeMoves helped me."

LifeMoves' mission, since 1987, has been to provide interim housing and supportive services for homeless families and individuals to help them rapidly return to stable housing and achieve long-term self-sufficiency. On any given night, the nonprofit feeds, clothes and houses approximately 700 people, about one-half of whom are children.

To learn more about LifeMoves, visit lifemoves.org or call 650-685-5880. To donate to The Almanac's 2018 Holiday Fund, click here, or find the donation coupon in The Almanac's print edition to donate offline.

The first few seconds after awakening; before I remember the virus
By Chandrama Anderson | 0 comments | 2,528 views

Can you stay healthy without making more trash?
By Sherry Listgarten | 2 comments | 1,820 views