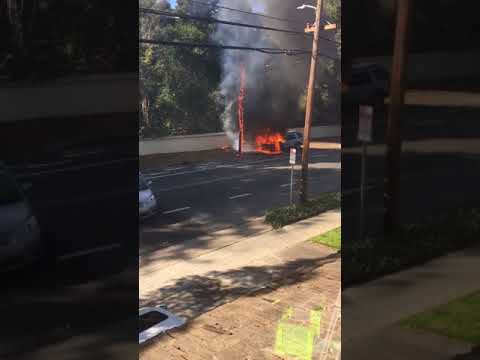 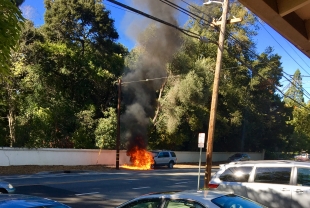 A contributed photo of a vehicle that erupted into flames the afternoon of Sept. 14.

A vehicle fire that broke out on Oak Grove Avenue near Marcussen Drive around 4:30 p.m. on Thursday, Sept. 14, causing a PG&E pole to burst into flame, occurred when someone started a parked car, according to witnesses. The would-be driver got out safely and no one was hurt.

According to Menlo Park Fire Protection District Chief Harold Schapelhouman, the fire was out in 10 to 15 minutes and the fire started in the motor compartment of the vehicle.

According to witnesses, the person who started the car was a Menlo-Atherton High School student, but the Almanac has been unable to verify whether that was the case.

The Almanac will update the story when more information is available.

The first few seconds after awakening; before I remember the virus
By Chandrama Anderson | 0 comments | 2,539 views

Can you stay healthy without making more trash?
By Sherry Listgarten | 2 comments | 1,831 views

Think about helping others in our coronavirus-affected area
By Diana Diamond | 3 comments | 1,726 views