What's next for Valley Presbyterian Church? 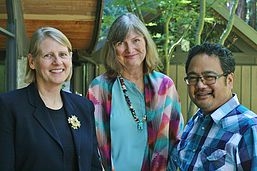 Left to right: Carla Christensen, Mary Jo Alderson and Bruce Reyes Chow are members of the team who began working in January to make the transition from the Goodman-Morrises to a new pastor or pastors for the church. (Photo by Ashley Pogue/Courtesy Valley Presbyterian Church.)

From the owner of LV Mar and La Viga, a Palo Alto restaurant inspired by Mexico City
By Elena Kadvany | 4 comments | 3,750 views

Can you Pay to Reduce your Carbon Footprint?
By Sherry Listgarten | 10 comments | 2,581 views

You Can Help: Scents and Migraines
By Chandrama Anderson | 1 comment | 2,181 views