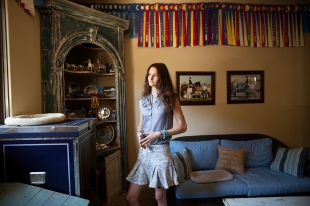 Mackenzie Drazan in the Woodside barn where her family keeps their horses. She rides competitively on a national level, as did her sister. (Photo by Michelle Le/The Almanac)

An amazing story, I'm going to share this with my friends! You've done a fantastic job!