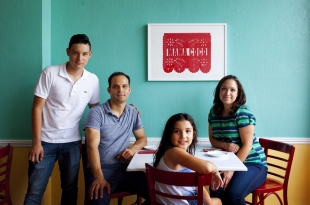 Fabulous food!! Just had lunch there today. High-flavor, original, satisfying, well-priced food in a clean, casual, colorful environment. A fabulous (and needed!) addition to the Menlo Park restaurant scene. Nice patio seating area outside in the back as well. Looking forward to going back again soon as there were too many tempting items on the menu -- hard to pick just one. I'm very happy I ordered the huarache with shrimp. Their guacamole (always my husband's test of a great Mexican restaurant) is so fresh and delicious. A great venue for the whole family. Thank you, Omar, for making us feel so welcomed.

Like this comment
Posted by Forrest
a resident of Menlo Park: Central Menlo Park
on Jul 16, 2014 at 5:54 pm

Great food! I highly recommend and will frequent this spot. Finally someone to do good mexican food at a fair price

I stopped by and looked at the menu but didn't find it to my liking. I also thought it was very expensive.

We had dinner on the patio tonight.. Cochinita pibil was really quite good. A difficult dish to make - Lots of flavor and spice. Cool condensed wine list too. Staff seemed very personable and approachable. Kid friendly. Very much a family setting. We will be back for sure.

I want Mex to Go back!!!! It was inexpensive, delicious and consistent.

Reader: I agree. Mex to Go was good and the right price. I really don't think we need a pricey Mexican restaurant.

You might want to re-read the reviews for that now closed restaurant -- Mex-to-go -- which are still on Yelp. There were numerous and repeated food poisoning complaints. Maybe that's why Mex-to-go went out of business??

Given the lack of restaurants coming into MP, this new one should be welcomed.

plenty of places for super cheap mexican if you want it.. I would rather spend the extra $1 ($8 for a burrito at this restaurant I think -not sure how it gets cheaper), get sit down service and watch my kids play while I enjoy a margarita. worth every penny. we were there tonight and look forward to going back. thanks Omar for taking good care of me and my family tonight

The food was tasty and fresh, but the prices were high and the portions small for Mexican. We all left hungry. Hope they improve. Would like to have another restaurant option downtown.

The owner spent time with us to explain the history of his mom's cooking and how hard it is to start up a restaurant.
We're going back to try the mole.

If you're expecting lots of mediocre food, this is not your place.

Peter Carpenter is a registered user.


We went there last night - good food and good service. And they were very busy. I think that Mama Coco will be a success.

From the owner of LV Mar and La Viga, a Palo Alto restaurant inspired by Mexico City
By Elena Kadvany | 4 comments | 3,743 views

Can you Pay to Reduce your Carbon Footprint?
By Sherry Listgarten | 10 comments | 2,573 views

You Can Help: Scents and Migraines
By Chandrama Anderson | 1 comment | 2,171 views