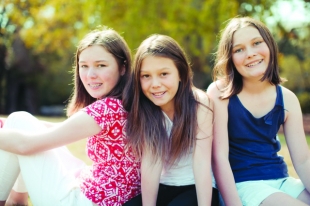 The Holland sisters, from left, are Kylie, Piper and Devon.

The Holland sisters – Kylie, 14, Devon, 13, and Piper, 11 – of Portola Valley are entrepreneurs, activists and musicians. Giving back to the world is something their family believes in.

Daughters of Paul Holland and Linda Yates, the girls founded the Earth Saver's Club for Kids in 2010, and have volunteered near (Haven House, food bank) and far (including the Kliptown Youth Program in Soweto last summer).

Their latest effort is forming a new social cause record label, Painted Wolf Records. Their first release, "Invitation to Dream," is a collection of bedtime ballads and lullabies, sung by Devon. It was recorded at Skywalker Sound and Fantasy Studios with Grammy Award-winning sound engineer and head of Skywalker Sound, Leslie Ann Jones, producer Peter Maleitzke, and concert-level musicians.

Kylie, Devon and Piper are using 100 percent of the profits from "Invitation to Dream" to raise the last $250,000 the U.S. Green Building Council needs to break ground on the first LEED-certified orphanage in the world in Haiti in spring 2014. It will be called the William Jefferson Clinton Children's Center.

The orphanage will provide a model for orphanages throughout the Third World, using sustainable materials to withstand natural disasters.

"With the fourth anniversary of Haiti's devastating earthquake just a few weeks away (Jan. 12), and tens of thousands of children still homeless, these young women are more determined than ever to achieve their goal," says Marisa Long, public relations director of the U.S Green Building Council.

The Holland sisters are no strangers to big ideas. They not only started the Earth Saver's Club for Kids a few years back, sister Devon has invented the Maji Mobile, designed to help women in Africa carry clean water.

Visit paintedwolfrecords.com to purchase "Invitation to Dream" for a donation of $20 or more. To learn more about the Holland girls, watch their video on YouTube.

The first few seconds after awakening; before I remember the virus
By Chandrama Anderson | 0 comments | 2,531 views

Can you stay healthy without making more trash?
By Sherry Listgarten | 2 comments | 1,824 views

Think about helping others in our coronavirus-affected area
By Diana Diamond | 3 comments | 1,711 views