This title is not clickbait. It is a reasonable projection of what will occur in Menlo Park over the next decade. Often the solution to a problem actually makes things worse in the short run, as the recent redesign of the Willow Road and 101 interchange clearly demonstrated. This is typical with large traffic improvement projects. However, the Willow traffic congestion pales in comparison to what lies ahead for Menlo Park due to current Caltrain and city plans. Unfortunately, our community is totally unaware and unprepared for the magnitude of this approaching traffic nightmare. It will be triggered by increases in Caltrain service levels starting in 2022 and made possible by the electrification of the Peninsula rail system, a process already well underway. This will be good news for Caltrain commuters but bad news for motorists who must drive to work, as the number of gate closings per hour and motorist delays at existing crossings will grow sharply. Like many other Peninsula cities Menlo Park is planning for the installation of grade separations at railroad crossings because these eliminate gate closings. However, the Menlo Park community needs to understand that train-related traffic congestion will get much worse before grade separations can be built, and construction itself can subject our city to many years of horrible congestion. This means Menlo Park must carefully consider the potential impact of construction when it evaluates alternative grade separation solutions, something it has not yet done.

The grade separation design the Menlo Park City Council has chosen raises tracks and lowers sections of Ravenswood, Oak Grove and Glenwood, and construction is expected to last four to five years. This will cause unprecedented traffic delays in Menlo Park and these will have spill-over onto El Camino, Encinal, Middlefield, Marsh, Willow and Valparaiso and smaller impacts on Santa Cruz and Middle. An installation of temporary “bypass” tracks called a shoofly will occupy both Garwood Way and Merrill. Lowering three streets will also add significant risk to the construction schedule. The City of San Mateo is building grade separations now and recently announced a one-year extension to its construction schedule after two years of rain and encountering problems relocating underground utilities. Menlo Park must deal with similar risks plus an existing Hetch Hetchy pipeline that runs under Oak Grove (and possibly Glenwood and Ravenswood). If you do not plan to live in Menlo Park after construction starts you will escape this disaster; otherwise, you will be trapped in your car like everyone else. 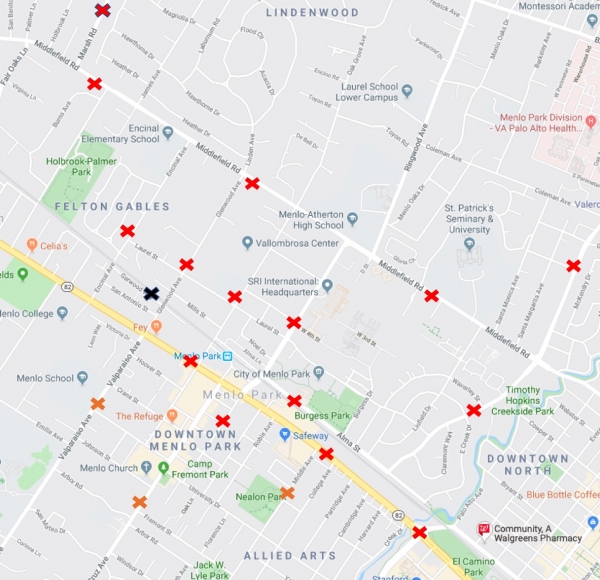 The red crosses indicate streets where major traffic congestion will likely occur once Caltrain increases the number of rush hour trains AND before grade separations can be built. The worst congestion will occur during construction. (Orange crosses mark streets with moderate congestion impacts.)

Finally, even IF grade separation construction were to star by 2027, traffic congestion relief would not be felt before 2032, at the earliest, and the risk of a much later date will remain for years, as there are many project uncertainties, e.g., construction costs, the city’s share of total costs and the source of Menlo Park local funding. Also, no state or county funds have been earmarked for new grade separations, and Caltrain has not yet established its priorities for building new ones on the Peninsula rail system. Menlo Park will need to aggressively compete for state and county funding and be ready to start when funding becomes available. Otherwise, it will jeopardize its position.

Motorists will not be the only ones that suffer from traffic congestion between 2022 and the completion of grade separations. Today, at a time when the Bay Area economy is booming, downtown Santa Cruz has many empty storefronts. Any significant increase in local traffic congestion, especially during construction, will be a nightmare for stores and restaurants because residents who live on the east side of the tracks will have countless more convenient alternatives in Palo Alto and Redwood City. In addition, traffic congestion could have a major negative impact on the response times of the fire district, police department and emergency medical services.

It’s impossible to predict the number and timing of additional trains that will run through Menlo Park during the next decade, when grade separations CAN be built, what designs Caltrain will approve and how Menlo Park will fund construction that costs hundreds of millions of current dollars. However, it is essential that the City Council build community support for its grade separation plans well in advance, as the city will need to allocate tens of millions of dollars to this project. Also, any substantial delays caused by resident opposition could jeopardize the city’s position in a future funding queue.

Menlo Park’s current plan to use hybrid grade separations on Ravenswood, Oak Grove and Glenwood will subject residents and local businesses to four to five years of construction and traffic congestion. This is an unacceptable and possibly avoidable. Menlo Park should not only carefully study the traffic impacts of its currently preferred hybrid grade separation design but also fully elevated grade separations, as the latter would reduce construction by two years and cause minimal traffic disruptions because streets would rarely be either closed or constrained to a single lane.