View all posts from Sherry Listgarten

The curious case of the broken-not-broken gas meter

Every month I send Palo Alto Utilities a photo of my gas and electric meters and they bill me a few days later. (1) That has worked fine until this year.

In February my bill showed zero gas and electricity use. I sent the utility a note along with the meter photos. I wanted them to fix the bill so they didn’t end up combining two months of usage into the March bill, which would mean more of my usage was charged at Tier 2 rates.

Here is the picture of the gas meter that I sent in. 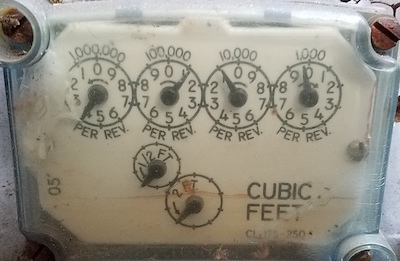 I didn’t hear back, so I sent the utility a note again a few weeks later.

Two days later the utility replied, saying that since we are close to the next billing cycle, they’ll just make any needed adjustments then. I again explained the point about Tier 2 charges and they pushed back while also claiming that the photo of my gas meter was in fact a photo of a water meter. Huh?

I responded and a few days later they fixed the billing.

Fine, that would have been that, except now I’m suspecting that the zero bill was intentional. They didn’t believe the gas meter reading -- it was too low -- and they wanted to confirm it the following month. You can see how much lower it was this year than last year because I electrified my heat in November. 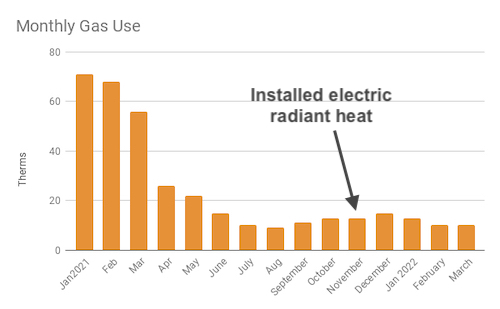 I came to this realization because something similar happened again last week.

A few days ago I received a bill showing that I used 12 therms of gas in July. But ever since I replaced my gas water heater with a heat pump water heater in May, my usage has been much lower, maybe 1 therm per month. That equates to about 10 hours per month on the gas stove (my one remaining gas appliance), which seems about right since I don’t cook much in the summer. 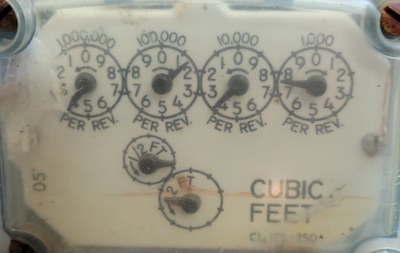 They said they would send a meter reader out to confirm the reading.

Okay. I asked when that would happen so I could unlock the gate.

The next morning, before I had a chance to reply, I saw a Utilities truck drive up and park in front of my house. I said hi and asked if he was there to read the meter. He said no, he was there to replace the meter. I was not expecting that, but fine. I figured he would read the old meter first to confirm the reading. I sent a note to the utility with the update, saying I hoped they could fix the bill.

Apparently, no, the problem seems to be that I am in fact using gas and the old meter was just not recording it properly.

I’m not sure what is going to happen now. Are they going to fix my bill as I asked? Will I have to pay for a phantom gas water heater? The old meter is gone and the new meter reads …. zero. 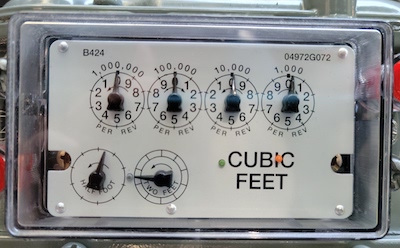 This cracked me up. Is Palo Alto so unprepared for homes to actually start electrifying that they can’t recognize it when they see it? Even with the electrification permits on file?

My takeaways: I hope that smart meters will eliminate some of this confusion. And I hope that low gas use in our homes becomes so normal that the utility figures out how to handle it without replacing perfectly good meters. But I also recognize that 1 in 6 households are behind on their utility bills and that may be one reason why Palo Alto Utilities is being extra careful. So I can’t really complain. And I do now have a nice, easier-to-read meter that I expect to continue to run very slowly until I replace my stove. But for those of you who are electrifying -- and I hope there are many of you -- my advice is to check your bills a little more carefully than usual.

Update (Aug 30): The utility responded and has adjusted my bill. Hopefully they will keep electrification in mind when they see a big drop in residential gas use, and hopefully you guys will give them plenty of cause to see that!

Notes and References
1. The meter reader doesn’t come by because I keep my gates locked due to my dog and to prevent theft.

Over 16% of light-duty vehicles sold in California this year were plug-in or fuel cell (hydrogen), up from 12% last year and 8% the year before. That is great progress!

Comment Guidelines
I hope that your contributions will be an important part of this blog. To keep the discussion productive, please adhere to these guidelines or your comment may be edited or removed.
- Avoid disrespectful, disparaging, snide, angry, or ad hominem comments.
- Stay fact-based and refer to reputable sources.
- Stay on topic.
- In general, maintain this as a welcoming space for all readers.

eileen is a registered user.


Amazing that you could keep your sense of humor. My PG&E rates are higher than Palo Alto. Maybe PG&E is trying to be more responsive after the all the awful fires, but my experience very different. I have a smart meter which probably helped. I was able to speak to someone on the phone at PG&E to arrange for an increased Tier 1 allowance and to have the gas turned off. Within a few days of my request, a technician arrived to turn off my gas completely. As an added bonus our electricity provider is Peninsula Clean Energy with a Time Of Use plan. I'm willing to pay more for that. Be sure to post your next utility bill, Sherry.

Report Objectionable Content
Posted by Mondoman, a resident of Green Acres,
on Aug 28, 2022 at 1:42 pm
Mondoman is a registered user.


Thanks for posting about the potential pitfalls of the "self reporting" system for meter reading, as the number of such customers may increase as some decline the new smart meter installs. At least with the new gas meter installation, someone with gasfitting expertise got a good look at your supply pipe and connection and would have reported any excessive corrosion or other irregularities.

On a side note, what ampacity service have you needed to support your use with the electrification updates - is 100A OK or is 200A necessary in practice?

Report Objectionable Content
Posted by Donald, a resident of South of Midtown,
on Aug 28, 2022 at 3:44 pm
Donald is a registered user.


Gas meters are being replaced all over town even if they are functioning properly. The new ones are compatible with a module to transmit readings, although those modules are not yet being installed. Maybe your correspondence just moved you up the meter replacement list.

Report Objectionable Content
Posted by Local Resident, a resident of Community Center,
on Aug 28, 2022 at 5:17 pm
Local Resident is a registered user.


When are you going to replace your stove with an induction stove and turn off your gas? Worth another blog post.

Report Objectionable Content
Posted by eileen , a resident of another community,
on Aug 28, 2022 at 5:38 pm
eileen is a registered user.


@Mondoman: A 200-amp service is definitely not necessary. 100-amp is feasible but requires some thought. 150-amp is easy. With a 100-amp service, you can get guidance from Tom Kabat's "Watt Diet", or you can consider getting a smart panel (e.g., made by Span), which will allow you to set priorities for the uses and automate smart choices about which appliances run when, ensuring you stay under the 100-amp cap at any given time while also ensuring that chargers and heaters get ample run-time. These panels can make the most out of the least when it comes to power.

One thing that is such a bummer about our service in Palo Alto is we have no way of seeing what our historical loads have been, which makes it harder to understand how much electrical "room" you have. With PG&E's smart meters, you can see that, and you can get new load approvals based on that. In Palo Alto, the load calculations are poorly informed and electricians have to exercise more judgment.

@Donald: Thanks, yes, the installer guy mentioned the coming new tech. But the person at CPAU specifically associated the new meter with the low usage and seemed to use it as justification for not adjusting the bill. That's what I object to.

@Local: You know, I am in no rush to replace my stove, since it uses so little gas and costs money to replace. I've done my electrification in order of impact. First the EV, then I waited a few years. Then my old boiler (and A/C!). I did the water heater at the same time since the hydronics guy was on it. Now I'm taking another pause. For one therm a month, I'm not in a big rush. Maybe some incentive will crop up for fully electrifying. You know, instead of spending $500 to install a new gas meter at my house, the city should have offered me the money instead towards a new induction stove and asked me to install it in the next three months. Then they could have skipped the new meter and cut the gas line.

BTW, it's not that I'm wedded to my gas stove. It's a pain to clean, for one thing. If someone were to come in and replace it for free, I'd take it! But I'm going with Marie Kondo's guidance to focus on things that spark joy, which is not my stove despite its electric ignition :) For me that means my next project is exchanging struggling plants like azaleas that don't love the new climate for others that will thrive and provide good habitat.

Hope this answers the questions, lmk if not.


Update: The utility has adjusted my bill and will credit me for the gas. You can see their comprehensive reply below. My hope is that this happens more and more often, and the city can get a better handle on how it can help to encourage this. I'd love to get a sense for what is happening at gas stations too. Will we start to see some close or repurpose in the next few years?

Report Objectionable Content
Posted by SRB, a resident of St. Francis Acres,
on Aug 30, 2022 at 11:54 am
SRB is a registered user.


Wow quite the ordeal. Although just imagine how much worse this can be for the many renters who either don't have their own meters or are forced by their landlords to use a Utility Management Company like Conservice where their bills are not based on your own consumption but some share of the overall building consumption (plus service fees.....).

I Was At The Stanford Shooting. Let’s Do Better Next Time
By Laura Stec | 2 comments | 2,729 views

Some of the best jobs around
By Sherry Listgarten | 3 comments | 1,340 views 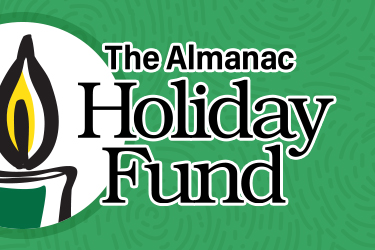