Pizzone is popping up with giant Milan-style pizza at Vina Enoteca in Palo Alto. Head there the next few Sundays for a two-foot-wide pie that can "comfortably feed six adults," or a slice, all with a crust that's crisp on the bottom and airy in the middle, and topped with fresh, flavorful ingredients. 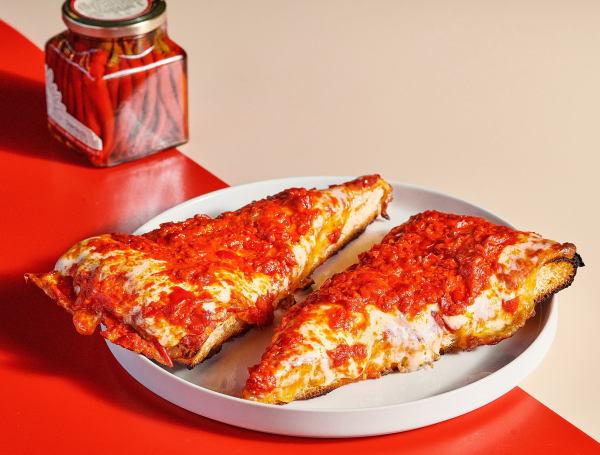 "We focused on the the best brand that we believe we can get." In pursuit of replicating his favorite pizzeria’s pizza outside Milan, Pizzone owner Dario Presezzi and his team decided to import Antico Casale Franzese tomatoes from Italy. (Photo courtesy of Joseph Weaver)

The idea for the concept has been a long time coming. Owner Dario Presezzi said he got the idea after immigrating to the Bay Area nearly a decade ago from a town outside Milan.

"Living here in the Bay Area, you miss the food from Italy a bit," Presezzi says. He missed it so much so that the week after he arrived, he went in search of a cappuccino and befriended Vina Enoteca's owner and managing partner Rocco Scordella in the process.

"I've been a partner with Vina Enoteca since the beginning," Presezzi says.

The food he missed most, however, was the pizza. Specifically, "my pizza, from where I grew up," Presezzi says. "By 'my pizza' I mean it's the one my family and friends used to get every weekend and eat together." 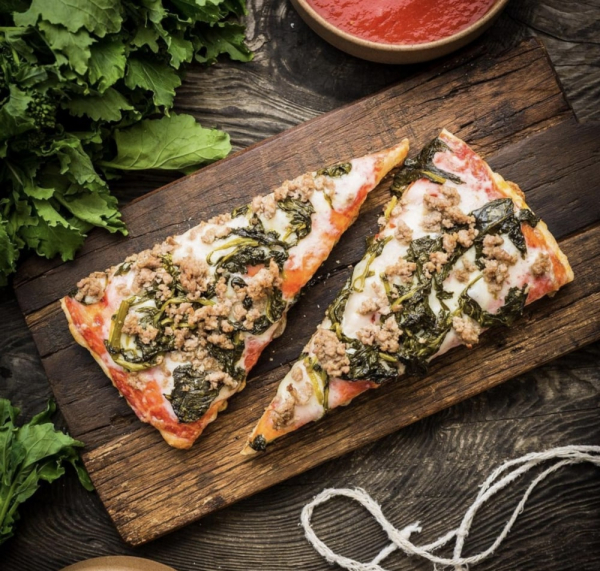 The Pizzone team captures the essence of Milan-style pizza, while incorporating fresh ingredients from the Bay Area. (Image via Pizzone Instagram)

The pizzeria where Presezzi and his family got their pizza is still in business in his hometown of Vimercate. Presezzi and his team consulted with them as the idea for Pizzone took hold, getting input on ingredients and equipment.

In the years leading up to this, Alex Guido was looking to branch out. Originally from the town of Amantea in Italy's Calabria region, he was working at his uncle's grocery store when he convinced a pizzaiolo to teach him how to make pizza. With the support of his uncle Nino, he left home to pursue his passion.

After an intensive pizzaiolo course in Naples, Guido arrived in the Bay Area. He continued to perfect his pizza craft while working at Doppio Zero in Mountain View, and then Vina Enoteca, where he met Presezzi. Guido was about to sign the lease to open his own restaurant when the COVID-19 pandemic set in and he put his plans on hold. 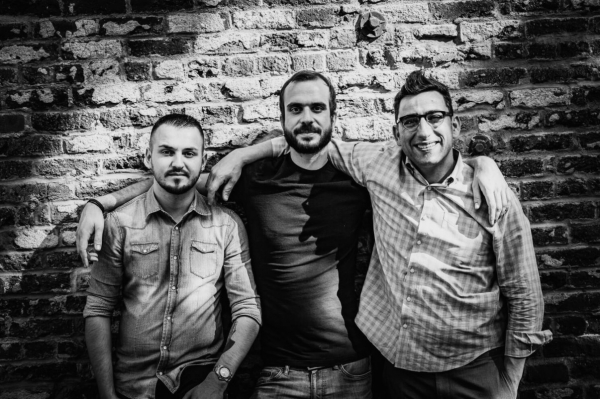 Alex Guido, Dario Presezzi and Rocco Scordella teamed up to bring the Pizzone pop-up to life at Vina Enoteca. (Image courtesy of Pizzone)

Presezzi told Guido that he believed a business concept focused on Milan-style pizza held promise. Presezzi's idea for pizza was different from the distinctive Neapolitan style that Guido had trained in. Neapolitan pizzas can take days at a time to prepare and have strict ingredient and production specifications. What Presezzi had in mind for his take on Milan-style pizza was an elevated fast food, still using quality ingredients, but adapting them to what the Bay Area has to offer while capturing what Presezzi enjoyed about the pizza in Vimercate.

"After a couple tries, he loved it," Presezzi says. The two decided to go into business together, in collaboration with Scordella at Vina Enoteca.

"The ideas started to turn into reality," Guido says.

Together, they tested different recipes using as many local ingredients as they could, including mozzarella from Berkeley's Belfiore Cheese Company and seasonal vegetables. After months of testing and consulting with the pizzeria in Vimercate, they determined there was no local equivalent for the tomatoes they wanted to use in their sauce, so they opted to import Antico Casale Franzese tomatoes.

"The tomatoes from Naples have some tastes that for me is very hard to reproduce," Presezzi says. "We focused on the best brand that we believe we can get." 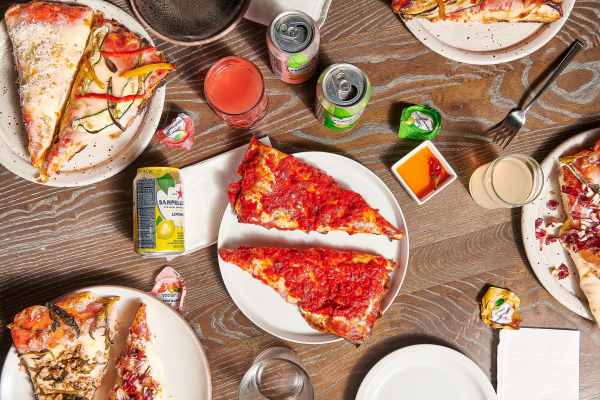 The crust on Pizzone’s Milan-style pizza is crisp on the bottom and fluffy in the middle. (Photos courtesy of Joseph Weaver)

Packaging also posed a challenge: They couldn't find a pizza box big enough to contain their pies. Pizzone pies are larger than an extra-large one from Domino's, and Pizzone's single, triangular slices are longer than most. So the Pizzone team designed their own box. For the first iteration of the design, they've used a recyclable card stock. Soon, they'll have the next iteration, made from a material that can be popped directly into the oven and then composted after.

This feature is especially important to Presezzi, who first came to the Peninsula with a mission to increase sustainability and achieve zero waste with his company, Bioforcetech.

"I'm bringing this mentality of environmentalism that's very strong," Presezzi says. "I see how waste is managed, how the impacts of carbon dioxide in the atmosphere is getting pretty intense. Everything I do now has to be as sustainable as possible. It's something I can't ignore. It became a passion."

Opening a new food business during the pandemic has been "very hard to do," Guido says, and the team is continuing to strive to make progress toward their greater goal. 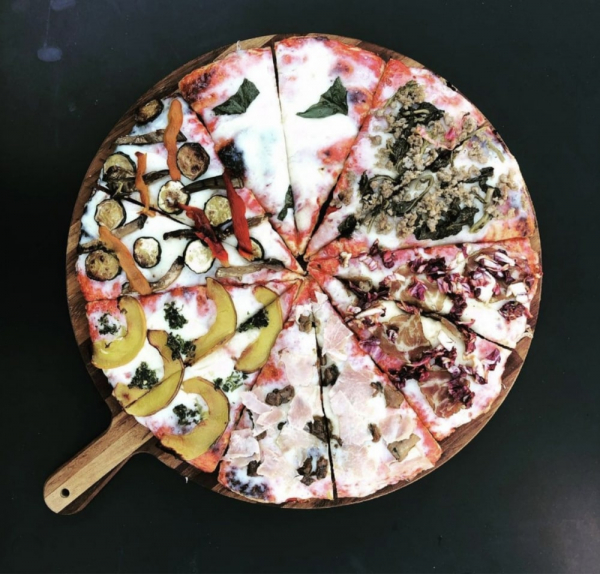 At two feet in diameter, Pizzone’s pizzas didn’t fit most pizza boxes. The team has designed their own. (Image via Pizzone Instagram)

They've started with the idea of a ghost kitchen, so that customers can order the pizza they make in Vina Enoteca's kitchen for delivery or takeout. They also have pop-up events so people can experience the pizza at the restaurant. But they ultimately want to launch in retail, freezing their pizzas and making them available to customers in stores.

They plan to introduce their pizzas at Sigona's Farmers Market, with other locations to follow, Presezzi says. Then, Bay Area customers will be able to get a taste of flavors inspired by Presezzi's favorite Vimercate pizzeria, right in their own kitchens.

"We want to create a pizza brand that's very light with very good ingredients that you can heat up at home, without having to go to a restaurant."

Pizzone will be popping up at Vina Enoteca in Palo Alto on Sunday September 19 and 26, as well as October 3 from 5 to 8 p.m. Follow Pizzone on Instagram to check out hours as they're updated.

Consider+Your+Options.+ is a registered user.

Report Objectionable Content
+  Like this comment
Posted by Anna Delacroix, a resident of Leland Manor/Garland Drive,
on Sep 18, 2021 at 9:27 am
Anna Delacroix is a registered user.


Not sure if I'd order the same pizzas depicted in the photos. A basic 2-foot pepperoni or traditional combo would suffice.

Get the day's top headlines from Almanac Online sent to your inbox for free.

Democracy and our police departments
By Diana Diamond | 3 comments | 2,182 views

Stroll the streets of Paris on the Peninsula with Bon Marché
By The Peninsula Foodist | 2 comments | 1,864 views