Justin Rodriguez and Jarad Gallagher were on the hunt. They'd embarked on a road trip, driving hundreds of miles through Spain and Portugal tasting dishes throughout the region. When it came to finding the specific dish they were searching for, the two just weren't having any luck.

"We were driving down this road, looking for this whole roasted suckling pig, but hadn't found it in the way we'd hoped," Rodriguez said.

Finally, there it was in Albufeira — in "a little restaurant with a sign of a suckling pig on it." 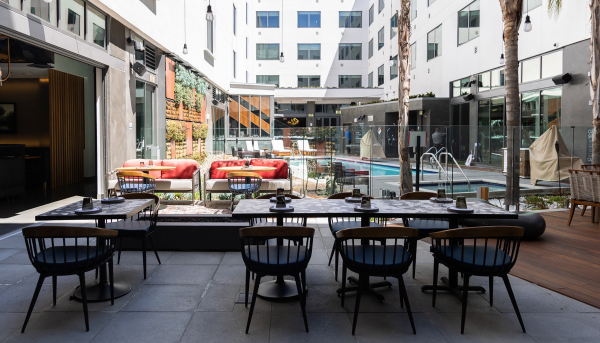 The exterior dining room at the center of the Shashi Hotel in Mountain View. Magali Gauthier.

"It was probably the best food we had," Rodriguez said. That's high praise, coming from Rodriguez and Gallagher, who both come from Michelin-starred restaurants, including Mountain View's Chez TJ. Now Rodriguez and Gallagher are bringing flavors from those experiences to the Peninsula at the Shashi Hotel in Mountain View. "That was something we really identified with as an outstanding cuisine where we thought we could add to the conversation," said Rodriguez, the director of food and beverage operations. "We're basically trying to be true to the intention of the dishes and the products we're taking from those areas, but putting our own interpretation on them in the way we'd want to eat it."

The Emerald Hour is open now, with three other food establishments to follow.

The Emerald Hour
The Emerald Hour is both a drinking and dining destination. There are tapas-style dishes like marcona almonds with Périgord truffles, sea salt, lemon zest, and gildas with manzanilla olives, boquerones and guindilla peppers. There are also charcuterie boards with cured meats and Spanish cheeses, as well as sandwiches featuring fresh and local ingredients like the Mt. Tam & Fig Melt, and A5 Miyazaki wagyu with lettuce cups and Vietnamese-inspired n??c ch?m. Much of the menu is based on seafood. "That's what I like to eat, that's what I like to cook," Gallagher said. The Emerald Hour offers such dishes as black cod with truffle, grains and squash blossom and oysters with green apple mignonette. 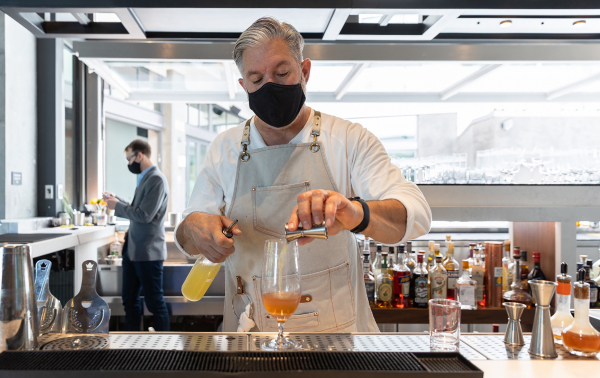 Cocktails feature recipes developed by Rodriguez, with a focus on clear spirits like tequila and white rum. A base spirit lays the foundation for each cocktail. Then, for anything else that's added, they use cooking and kitchen techniques for house-made syrups, tinctures and bitters.

"We make everything fresh," Rodriguez said.

Seasonal cocktails showcase this. For a seasonal take on a sidecar, the team previously used a base of Chateau Dudognon Grand Champagne Cognac. Then they took a pound of Rainier cherries and put them into a Cryovac vacuum chamber. They cooked them sous vide for two hours at 130 degrees before bringing it all together and finishing the cocktail with orange. Currently, for the Snap Pea on the Rock cocktail, they're extracting solids from sugar snap peas by running them through a centrifuge to create a pea gin that's refreshing and light. 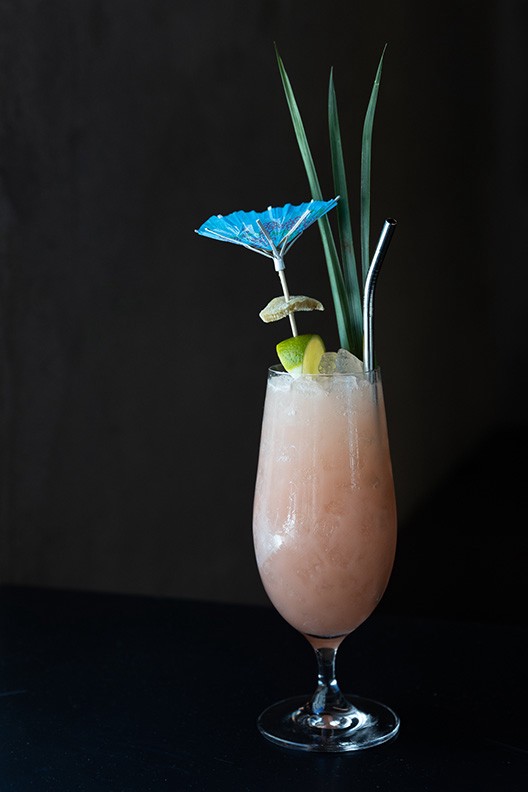 The "Everything's Peachy" cocktail is made up of white rum infused with Snowbrite peach, a brown butter-pecan orgeat, lemon juice, lime juice, Peychaud's bitters and Amaro Nonino, as well as cardamom seed and grains of paradise. Magali Gauthier.

"We have centrifuges going all the time … and a lot of modern techniques," Rodriguez said. "It is certainly equipment you'd see in a lab, but we're just making drinks with it."

"(The cafe's) got all the bells and whistles, and integrations of some technology, like a self-pour robot machine for pour-overs," Gallagher said. ("Starbucks has already filled the market with what they do. There's no reason for us to duplicate that," he explained.) 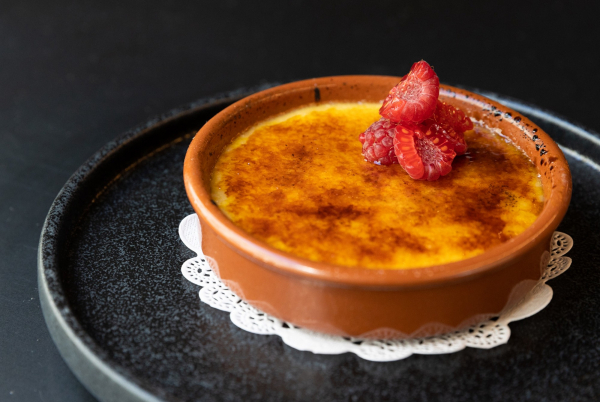 The Emerald Hour's Crema Catalana is infused with orange and cinnamon. Magali Gauthier.

The white-and-gold cafe will have two signature desserts: One will be an affogato, and the other will be inspired by European baguettes and Nutella. "If you're a traveling student, you buy a big batch and that's what you live off," Gallagher said. Carte Blanche makes this dessert extra decadent with brioche. "Think of a lobster roll, filled with chocolate ganache," he said.

Broma
As a casual spot for Spanish fare, Broma will complement Emerald Hour. "Broma" is an expression that means to "banter back and forth," said Gallagher. "It's kind of like giving each other a hard time."

He wants a meal with more of that, and less screen time and Googling. "I like the idea of a group of people sitting around a table … bantering back and forth about sports or whatever it is," Gallagher said. "Now, conversations are a little more pointed and direct, because everyone has the answer to everything." 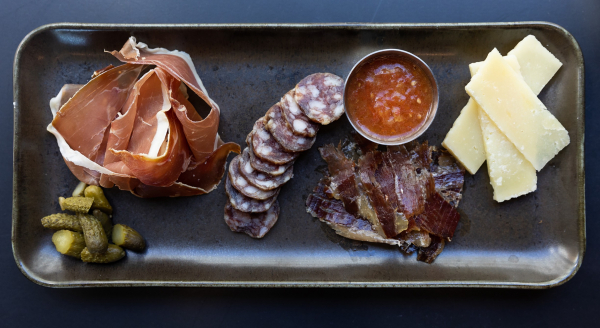 Gallagher isn't afraid to shake up the dining room vibe as needed. "One night, it was getting a little stuffy in that area. I went out there and rang a big gong to make everyone laugh. I need it to be fun," Gallagher said. "It's supposed to have a fun, positive energy."

Belle Terre
Belle Terre will offer a different atmosphere — the fine dining restaurant was "designed like a gold meteor slammed into the earth and petrified into it." A dining room looks toward a doorless kitchen with a smoker and hearth. There's a parlor with crystallic details in the back for people seeking privacy, and a wall-to-ceiling wine cellar that runs the length of the restaurant.

The aim is to be exclusive, Gallagher said, and there's a price tag to match: items will start at $85 on a prix fixe, a la carte menu that features French, Italian and German cuisine with Californian influence. He emphasizes that it's "all really exclusive food" — they'll eventually grow some of their own produce, aiming for fruits and vegetables that can't be found elsewhere.

Something else that can be hard to find? "We're trying to give a three Michelin-starred dining experience in 1 1/2 to two hours," Gallagher said.

Expediting the fine dining experience is a practical consideration for serving Silicon Valley.

"People are traveling, they're tired, they've got long work meeting days. People aren't that interested in having a meal that goes past three hours," Gallagher said. "I like my 5 1/2 long meals, but in Silicon Valley with the traffic and the way schedules work, it's not very realistic."

But banter over good food and drink? That just might be more realistic.

The Emerald Hour is open now at the Shashi Hotel in Mountain View. The team hopes to open Carte Blanche and Broma before the end of the year, and Belle Terre in 2022.

--
Dig into food news. Follow the Peninsula Foodist on Instagram and subscribe to the newsletter to get insights on the latest openings and closings, learn what the Foodist is excited about eating, read exclusive interviews and keep up on the trends affecting local restaurants.

Democracy and our police departments
By Diana Diamond | 3 comments | 2,190 views

Stroll the streets of Paris on the Peninsula with Bon Marché
By The Peninsula Foodist | 2 comments | 1,882 views