Uploaded: Nov 28, 2016
"It's time to put the rumors to rest," Seth McDaniels, general manager of Palo Alto's The Epiphany Hotel said in a statement. Renowned Japanese restaurant Nobu is opening its first Northern California location at the hotel next year, he confirmed.

Rumors have been swirling for months about the high-end restaurant's move to 180 Hamilton Ave., but remained unconfirmed by both Nobu and Epiphany representatives until now.

The Epiphany’s restaurant, Lure + Till, will officially close on Jan. 2, 2017, to make way for the "anxiously awaited addition" of Nobu in June, McDaniels said.

"While the closing of our beloved hotel restaurant is bittersweet, we are thrilled to usher in a new era of dining here at The Epiphany, welcoming one of the most renowned, upscale Japanese dining experiences to Palo Alto," he said. 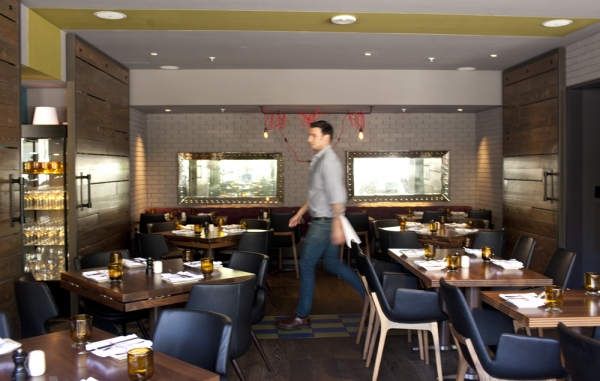 Lure + Till opened with The Epiphany Hotel in downtown Palo Alto in 2014. Photo by Michelle Le.

A rendering included in Nobu's project plans, submitted to the City of Palo Alto in October.

The restaurant space itself, however, will go through a "dramatic transformation," McDaniels said.

Lure + Till opened with The Epiphany in March 2014. Lure + Till's acclaimed chef Patrick Kelly left the restaurant two months ago to relocate to Denver.

Former Oracle CEO Larry Ellison, who partnered with Matsuhisa to build a hotel on the Pacific Coast Highway in Malibu, bought The Epiphany last year.

Nobu representatives did not immediately return requests for comment.

State Street Market plans overhaul of its eateries as it cuts ties with Bon Appétit, triggering layoffs
By The Peninsula Foodist | 11 comments | 3,977 views

Doing more with the natural spaces we have
By Sherry Listgarten | 6 comments | 2,544 views