An Open Letter To A Southwest Flight Attendant

At approximately 8AM on Friday, February 13, 2015, a team of 37 teen and pre-teen swimmers wearing red and black travel uniforms boarded Southwest flight 372 on a plane heading to Phoenix, AZ from San Jose, CA. You were one of the flight attendants.

I am sure that many travelers might shudder to see a large group of young people ? brimming with excitement-- boarding their plane. I admit that even I, a parent of one of those swimmers, might have been a little irritated at the anticipation of loud voices and teenage antics on an early morning flight.

You didn't see teens and pre-teens; you saw athletes, and you were excited for them. You came over and began asking these young people about the event they were going to be competing in for the next four days.

"I have some advice for you," you declared, "be focused." When they got up on that starting block, you told them to tell themselves: "I CAN?and I WILL." You had them repeat this chant, and as you worked the rest of the flight, you stopped by their seats to give them "pep talks" explaining that they could accomplish anything if they kept themselves "focused and determined."

Thank you. You should know that the time and attention you gave them had a profound impact on these young people, with my daughter, McKaela, explaining, "he made us feel important. He told us that if we believed in ourselves, we were unstoppable. His positive attitude became contagious."

When the plane landed, and throughout the subsequent grueling four days they competed, the chain of inspiration that you set in motion continued to ripple throughout these young athletes. Swimmer Kate Milne explained that when she was exhausted throughout the weekend, she would focus on those five simple words: I can and I will.

They all DID, and according to their coach, Laura Mitchell, with amazing results.

You had work to do, but you took the time to see, hear, and inspire our young people. Thank you not just for what you did, but for who you are. Please know that that they got the message. 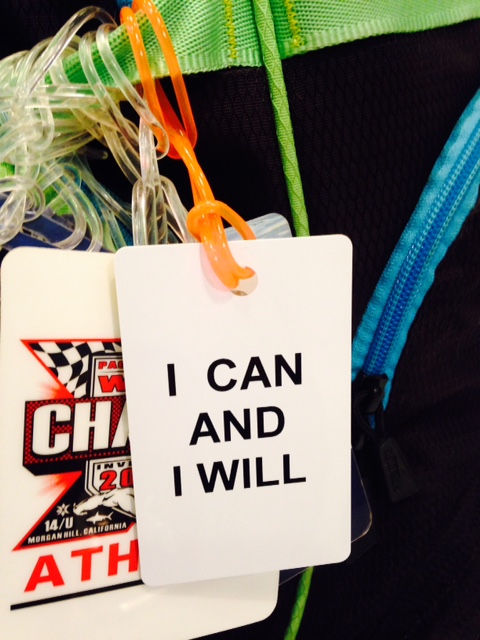 At the Arizona meet, members of the swim team had customized bag tags made with their new team-- and personal-- mantra.

Ditto all that. My daughtef also told me about the flight attendants actions. My daughter also put the phrase "I Can I Will" on her bag tag.

Report Objectionable Content
Posted by Peter Carpenter, a resident of Atherton: Lindenwood,
on Feb 20, 2015 at 1:47 pm
Peter Carpenter is a registered user.


Great story - thanks for posting it.


I am pretty certain that this gentleman did not get up that morning thinking how he would inspire 37 young people. And yet, that is exactly what he did. He took a moment to learn about them, hear them and engage them.

Report Objectionable Content
Posted by Doug, a resident of Portola Valley: Westridge,
on Feb 20, 2015 at 8:43 pm


as a retired airline flight crewmember, I so appreciated this 'good news'story; I remember so many positive comments from passengers and of course, we never hear again from these people as life goes on. Thank you for a great story. I brings me happiness to know people care.
Doug


What a wonderful and heartwarming story! Thank you so much for this account, which shows that, in spite of all the stress and pressure flight attendants are often under, they are often kind and understanding, and even inspiring, as in the case of this particular flight attendant. I am very impressed by what that flight attendant did for those young people -- who will never forget how he helped them to believe in themselves. "I CAN AND I WILL" -- what a great way to motivate yourself when doing something very difficult. I really admire that flight attendant.

As I said in another comment, I just love stories like these -- especially these days, when the news is full of so much very bad news. Again, thank you for posting this wonderful story.


Its not often enough that people pause to thank others for the small acts of grace that create ripples of positive energy as they touch others. Thank you for your blog, Erin.


What an amazing gesture from this person, I hope your article can reach Southwest and the flight attendant can get a round of applause from all of us. Well done Erin, and a big thank you!

Report Objectionable Content
Posted by Erin Glanville, a Almanac Online blogger,
on Feb 21, 2015 at 10:28 am
Erin Glanville is a registered user.

Report Objectionable Content
Posted by twinner, a resident of Menlo Park: other,
on Feb 21, 2015 at 5:46 pm


What a great story! I read about this this morning and made signs for our school championship basketball game! They team also read the article! I think it gave them the extra push to never give up!

Report Objectionable Content
Posted by hockeyite, a resident of Portola Valley: other,
on Feb 22, 2015 at 11:29 am


We can all use a pep talk like this ! It's never too late when presented with a challenge to remember those 5 words. Thanks for an uplifting piece. and CONGRATULATIONS to all those inspired swimmers.

Report Objectionable Content
Posted by Rhonda Sadler, a resident of another community,
on Feb 24, 2015 at 8:13 am


I am a flight attendant with SWA. I THANK YOU! We often get inspiring stories but never in 27 years have I heard one to this magnitude. It is so thoughtful you shared this story and I hope to let the gentleman working this flight know what his kindness has done. We need him to keep up that positive contagious spirit the world needs him! I hope your daughter and her swim team inspire others and they have a successful season and future! Thank you so much for sharing!

Report Objectionable Content
Posted by Lisa Burr, a resident of another community,
on Feb 24, 2015 at 8:26 am


Not only am I a flight attendant for SWA, but a mom of a young swimmer! I've been on many flights with young athletes and love them. The excitement and love these kids have for their sport is contagious. I'm so proud of the flight attendant that held such high regard and inspired the swimmers is truly amazing. Thank you for sharing for sharing. I'll be sharing with our swimmers the same motto! Not only in sports but in life.....I CAN AND I WILL! GO MAC!!

Report Objectionable Content
Posted by Coach, a resident of Portola Valley: other,
on Feb 24, 2015 at 9:26 am


What a great story. Cheers to this flight attendant!

Report Objectionable Content
Posted by Jennifer Sollman Allen, a resident of Menlo Park: Central Menlo Park,
on Feb 24, 2015 at 11:57 am


THANK YOU FOR THIS STORY ERIN!!
So happy to have found your blog
Thank you for your positive community service :-)
Jen

Report Objectionable Content
Posted by Carrie, a resident of Portola Valley: Westridge,
on Feb 24, 2015 at 1:24 pm


Thank you for taking the time to post this. Awesome story. Hope that flight attendant sees this. Got to get him one of those luggage tags!


What an amazing story! It actually brought tears to my eyes. :)


What a Great Story, thank you for sharing it, It should be Front Page.

Report Objectionable Content
Posted by pearl, a resident of another community,
on Feb 26, 2015 at 12:49 pm
pearl is a registered user.


I hope someone sends a copy of this to SWA so it can be put in the Flight Attendant's personnel file! Way to go!!! ; )


Thank you to all of you who have asked about making sure that Southwest Airlines sees this. They have, and they are rightfully proud. They are checking with the flight attendant to see whether or not he would be willing to have his name made public. Either way, they plan to recognize him.

A link to the Almanac and this piece will appear on Southwest's online newsletter.

Thank you for the positive words and "passing on" the message; you can and you have.

Report Objectionable Content
Posted by Annie, a resident of another community,
on Mar 11, 2015 at 4:49 am


As the Mom of a former high school, college and now Master swimmer I can say from experience what this gentleman did has profound impact. To make someone feel important is an example for us all to follow, I can and I will! It's great to read "good" news, thank you for sharing.

Report Objectionable Content
Posted by Swimmer, a resident of another community,
on Apr 14, 2015 at 3:41 pm


As a swimmer who was on this flight, I am touched to see that the Flight Attendant's small gesture of "pumping us up" has made an impact on society. He really did a great job of keeping us happy and adding huge smiles to all of our faces. Throughout my races I was constantly thinking "I can and I will". I believe most of my team mates and I will carry that saying for a long time to come.
For us it was "The pep talk from 2000ft in the air", a fun memory the 37 of us can share.