View all posts from Martin Lamarque

Navigating the middle is not easy

Uploaded: May 8, 2014
I believe that the best way to contribute to a civilized society is by living by one's principles and beliefs, without ignoring the hard facts. But trying to navigate through the middle, has gotten more difficult as we get entrenched in our political opinions.
Consider some of my predicaments:

If I happen to believe that there are too many crooks who run for public office as Democrats, and at the same time I know that there are many more crooks that run as Republicans, can I claim impartiality?
You said no? Even if by all counts, it can be proved that when a corrupt politician gets caught, it is more likely that individual belongs to the Party with the elephant logo?

If I say that there is no excuse for the littering often present on the streets of Belle Haven, and that we have no one else to blame but ourselves, can it be deemed prejudice, and do I lose the right to advocate for the neighborhood? 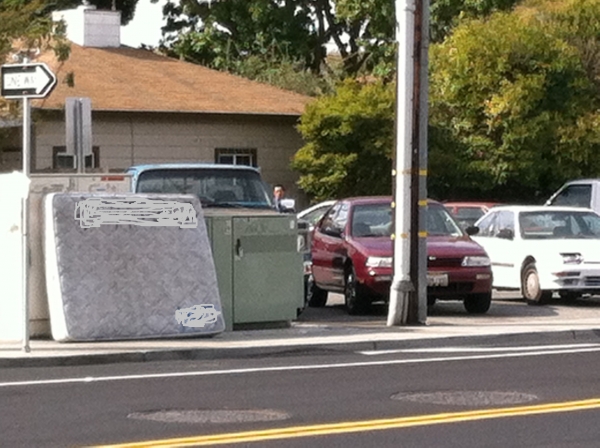 Someone dumped this mattress on Belle Haven's main avenue, where it stayed for four days.

If I assume that what leads many to join the Tea Party is not love for the country nor political knowledge, but their racist leanings, am I being intolerant? Even if I am basing my assumptions on the fact that many of the Tea Party's followers also belong to racist groups?

Would criticizing the police when they don't seem to care as much for the well-being of the Eastside residents of the city, as much as they seem to do for those of the Westside, cancel out my recognition of the important job police do?

If I believe that the best way to assure all workers receive decent pay, benefits and rights, is by promoting unionization, but at the same time would like unions to stop financing the campaigns of bad politicians, will I be accused by the Right of promoting a class war, and by the Left of being a sellout?

If I admit that affirmative action may sometimes give opportunities to some that should have worked a little harder, but can't help noticing that having a lot of money makes it so those who have it don't even have to work at all, can I be considered neutral on the subject?

Can I claim to be in the middle if can't prove global warming is real, while noticing that those denying it oftentimes do so on lies and misinformation?

Does wishing that democrats showed more spine more often, but fearing the senseless ways of the Republicans, mean I am right in the middle, or that I am a Party-less man?

What a unopinionated guy like me is supposed to do?.

Do what happened to the mattress? Did anyone, of any political party or none, contact Public Works to get it removed?

Why would you be prejudiced if you complained about littering on your neighborhood's streets? Martin, you ARE complaining, and for good reason. I have no idea if you're prejudiced about most things, but it seems to me that you're prejudiced against litter. I think that is a good thing.

Of COURSE Menlo cops care less about your area than other parts of Menlo. It's been that way for a long time and they see no need to change it. They way for you all to get things to change is to organize and demand change. Don't ask, demand.